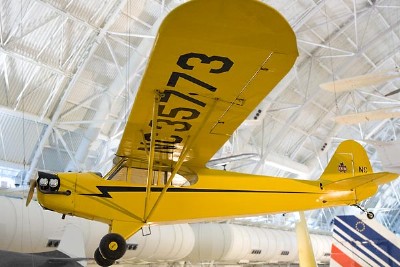 A little giant of civil aircraft, the timeless Piper J-3 Cub was easy to fly and well suited to a variety of tasks. Because the Cub was economically priced, it helped democratize civil aviation. See more classic airplane pictures.

No private plane has so ever completely captivated the American public like the famous yellow Piper J-3 Cub, a high-wing, two-place classic airplane of utterly conventional structure. Although there were many competitors, some almost identical in appearance and performance, it was the Piper J-3 Cub that came to represent the private pilot's dream. Further, the plane earned its place as an American classic in peace and war.

Although it carried Bill Piper's name, the Piper J-3 Cub's roots lay with another pioneer designer and self-taught aeronautical engineer, C. Gilbert Taylor. With his brother Gordon, he formed the Taylor Aircraft Company. There, the pair built the E-2, which, with its slim fuselage, open cockpit, parasol wing, and Brownbach "Kitten" engine, won the name of Cub.

C.G. Taylor continued to develop and refine the classic aircraft over the years. After Gordon died in 1928, C.G. was joined by William T. Piper, a successful oilman. The two parted company in 1935, with Taylor forming his own firm to produce basically the same aircraft, modified to have side-by-side seating.

In 1935, Piper Cub sales climbed to over 200; by 1941, Bill Piper, the master salesman, had boosted sales to 3,197. Nearly twice that number of the classic airplane were purchased by the military services during World War II, when Cubs were used for training, liaison, medical-evacuation, observation, and many other tasks.

The simple, honest nature of the Piper J-3 Cub made it a marvelous trainer -- you had to fly it at all times, especially during take-off and landing. On the other hand, it was quite forgiving of student mistakes. In the field, its simple steel-tube, wood, and fabric construction made it easy to repair and maintain. When the Cub was used in what would later be called a forward air-controller role, its low speed and good visibility were invaluable, as was its ability to take off and land from tiny fields.

Why Is 'Mayday' the International Distress Call?
Flexible, Bendable Wings Could Put a New Twist on Air Travel
With More Drones in Our Skies, We're Going to Need Droneports