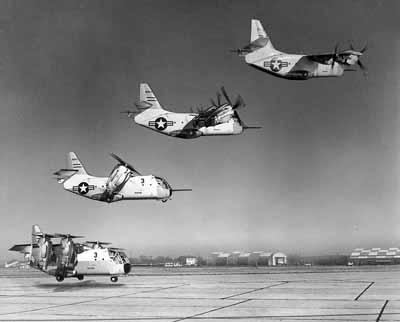 January 11, 1965 The LTV-Hiller-Ryan XC-142 makes successful transitions from vertical to forward flight and back.

March 23, 1965 The two-person Gemini 3 spacecraft makes its first flight. Virgil "Gus" Grissom and John Young make three orbits in the first flight mission that moves from one orbit to another.

May 1, 1965 Colonel Robert L. Stephens pilots a Lockheed YF-12A to establish a world speed record of 2,062 miles per hour at Edwards Air Force Base.

June 3-7, 1965 James A. McDivitt and Edward White complete 62 orbits in Gemini 4; White is the first American to walk in space.

September 7, 1965 The Bell Model 209, which will become the Huey Cobra, makes its first flight.

November 15, 1965 A Flying Tiger Boeing 707 becomes the first to fly around the world across the poles.

The General Dynamics F-111A was one of the most controversial warplanes in history, made to meet the demand for commonality in United States Air Force and Navy fighters.
Peter M. Bowers Collection

May 18, 1966 The LTV XC-142A triservice V/STOL transport makes carrier takeoffs and landings on the USS Bennington.

July 12, 1966 The Northrop M2-F2 lifting body, predecessor to the Space Shuttle, flies. It has a wingless design, using its fuselage to generate lift.

August 10, 1966 Lunar Orbiter 1 is launched by NASA to photograph the moon and survey Apollo landing sites.

September 8, 1966 The Phoenix missile, to be the heart of the F-14 weapon system, undergoes a successful full-function test launch from an A-3A Skywarrior.

December 6, 1966 The Luftwaffe grounds the Lockheed F-104 fleet after the 65th accident.