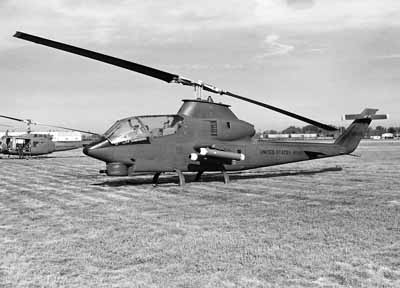 The Bell Huey Cobra was an aerial fire support system with a narrow, tandem-seat fuselage and small stub wings for additional lift and an armament platform.
Warren M. Bodie Collection

January 2, 1967 Boeing is awarded the contract for the design of a supersonic transport; the design will eventually be canceled.

February 26, 1967 Grumman A-6 Intruders conduct the first aerial mining of the Vietnam War, laying minefields in the mouths of the Song Ca and Son Giang rivers.

April 27, 1967 A-6 Intruders and A-4 Skyhawks raid Kep Airfield in North Vietnam, striking MiGs on the ground.

May 23, 1967 The Hawker Siddeley Nimrod, a development of the de Havilland Comet 4, makes its first flight.

March 17, 1968 U.S. F-111s begin operation in Vietnam. The aircraft prove to be disastrous, and they are withdrawn from service.

May 5, 1968 A Grumman Gulfstream II lands at London, completing the first nonstop transatlantic flight by an executive jet.

June 8, 1968 Barnes Wallis dies at the age of 80. He invented the "Dam Buster" raid bombs and geodetic airframes; he also designed dirigibles.

September 8, 1968 A Consortium of French and English manufacturers results in the first flight of the Jaguar E-01 prototype; the aircraft will serve well in the Gulf War.