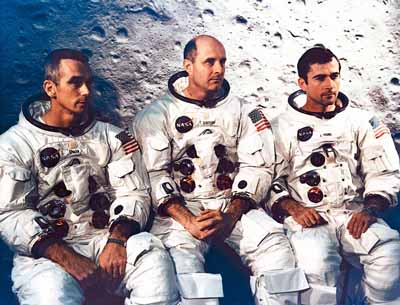 The three primary crew members for the Apollo 10 mission (Eugene A. Cernan, Thomas P. Stafford and John W. Young) pose in front of a large map of the lunar surface. They launched on May 18, 1969.
NASA

January 14, 1969 Exhaust from a starter generator unit detonates a Zuni rocket warhead onboard the USS Enterprise; 27 people are killed.

March 5, 1969 The existence of the Mil-12 helicopter, the largest ever flown, is announced.

April 14, 1969 A North Korean aircraft shoots down an unarmed Lockheed

July 24, 1969 Neil Armstrong, Michael Collins, and Edwin "Buzz" Aldrin, the Apollo 11 astronauts who went to the moon, are recovered by helicopters off the USS Hornet.

October 2, 1969 The first Hawker Siddeley Nimrod, a development of the original de Havilland Comet, is delivered to the RAF.

October 12, 1969 The first SEPECAT Jaguar strike fighter to be completed in Britain makes its first flight.

December 17, 1969 The first Lockheed C-5A Galaxy is handed over to the Air Force; this controversial aircraft will have tremendous importance in several wars.