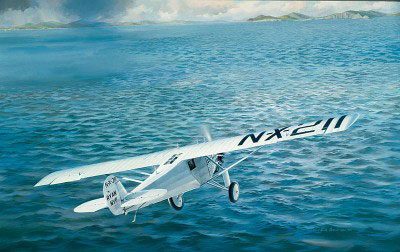 The Ryan NYP monoplane, the Spirit of St. Louis, is inextricably linked with American aviator Charles Lindbergh. In 1927, the 25-year-old flier made the first nonstop solo flight across the Atlantic, from New York to Paris. Time: 33.5 hours. See more classic airplane pictures.

When the Ryan NYP Spirit of St. Louis classic airplane was introduced in 1927, the United States was poised on the brink of an aviation revolution. New designs were appearing, the stock-market was strong, and the nation, immersed in the giddy whirl of the 1920s, was ready to embrace a new hero.

All of these things came together on May 20, 1927, when young Charles A. Lindbergh set off alone in his tiny, silver Ryan NYP monoplane, the Spirit of St. Louis, from Roosevelt Field, Long Island, headed for Paris. He had no navigator, no radio, and only the simplest of maps.

Most people believed he could not possibly make the dangerous flight, which had already claimed many lives, including those of the famous ace Charles Nungesser and his navigator, Francois Coli. The trans-Atlantic flight was long and hazardous, and the Ryan had only a single engine. But Lindbergh knew the nine-cylinder Wright Whirlwind radial was extraordinarily reliable, and he trusted it -- and himself.

Charles Lindbergh's Ryan NYP, which he called the Spirit of St. Louis, had no windscreen, so visibility directly forward was impossible. If the young pilot wanted a view of what was ahead of him, he had to crane his head from the side window.

After a hazardous take-off, Lindbergh spent 33 hours and 30 minutes in a sleepy haze, so well described in his 1953 book, Spirit of St. Louis, but he overcame all obstacles to reach Paris and win the $25,000 Ortieg Prize. Although worried that there might be no one at the airport to meet him, Lindbergh landed to a huge crowd crazed with enthusiasm, becoming almost instantly the most famous man in the world.

Charles Lindbergh's feat thrilled the world, and made him a beloved, international celebrity. The Ryan, too, entered legend.

Lindbergh had closely supervised the development of the Ryan NYP from a standard -- and rather pedestrian -- Ryan monoplane. A long wing was built and a huge fuel tank installed. Lindbergh loved the airplane, even though it was unstable and not very pleasant to fly. He always used the term "we," meaning the plane and himself, when he referred to the flight. The Spirit of St. Louis hangs today in the National Air and Space Museum in Washington, D.C.