by John Fuller
Prev NEXT
7 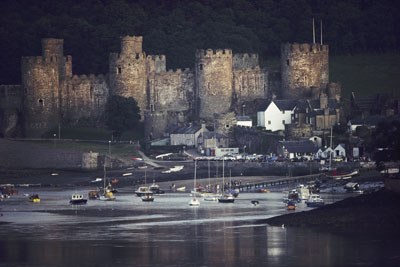 The massive, eight-towered Conway Castle and its walled garrison town, the latter of which the seven-year-old John Williams expected to jump off of and fly.
Farrell Grehan/National Geographic/Getty Images

Children often express their desire to fly from an early age. We often have fanta­stic dreams of floating or flying around effortlessly when we're young, and it's no surprise adolescents are drawn to superheroes like Superman, who can run, jump and fly faster than a speeding bullet.

If we're lucky enough, however, our parents let us know that actually attempting to fly without an airplane or helicopter and a licensed professional behind the wheel is not a good idea. Unfortunately for one boy, seven-year-old John Williams from Conway, Wales, no one passed on this valuable information concerning the human body's inability to fly. One day while wandering the walls of Conway, young Williams was compelled to throw himself out toward the sea, hoping the wind would carry him away. The coat he was wearing at the time was long, and he assumed it could billow out and act like a sail or wings. The boy, according to John Hacket in 1693, "suffer'd an adventitious Mischance" and fell immediately onto a rock below. The stone "caused a secret Infirmity, fitter to be understood, then further describ'd" -- in other words, the fall Williams suffered castrated him. Williams's infirmity didn't slow him down, though, as he became Archbishop of York and lived to the age of 78.

While Williams got the idea early on that men weren't built to fly without proper propulsion, one man just couldn't give it up. To learn about the bungled attempts of Pierre Desforges, read the next page.