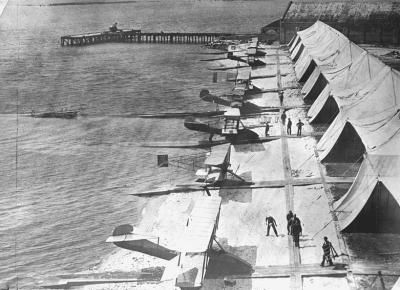 January 1914 The Il'ya Muromets bomber is flown for the first time.

February 23, 1914 A prototype of the Bristol Scout flies.

April 1914 The Fokker M.5, a prototype of the Eindecker, appears.

May 6, 1914 Navy Lieutenant P.N.L Bellinger's aeroplane is hit by rifle fire. This is the first recorded U.S. aerial combat damage.

August 1, 1914 Germany declares war on Russia. In subsequent days, it becomes a true world war, with Allies versus the Central Powers.

August 22, 1914 The British RFC takes a reconnaissance of German lines.

October 5, 1914 Corporal Louis Quénault and Sergeant Joseph Frantz of the French Air Force shoot down a German Aviatik. It's the first victory in aerial combat.

December 21, 1914 A German airplane drops bombs on Dover; it's the first attack on England.

It is difficult to imagine the tremendous grip the dirigible had on the public, especially in Germany.
Peter M. Bowers Collection

April 1, 1915 Roland Garros uses a machine gun fired through a propeller (unsynchronized) to shoot down a German plane.

May 31, 1915 The first Zeppelin raid on London kills seven civilians.

June 5, 1915 Flight Sub-Lieutenant R.A.J. Warneford is awarded the Victoria Cross for dropping a bomb on an LZ 37. He is killed 12 days later.

July 1915 Fokker E 1 monoplanes ("E" standing for eindecker, or monoplane) arrive at the front, the first to have a synchronized gun firing through the propeller.

July 15, 1915 Lieutenant Kurt Wintgens scores a victory with an Eindecker fitted with a synchronized gun.