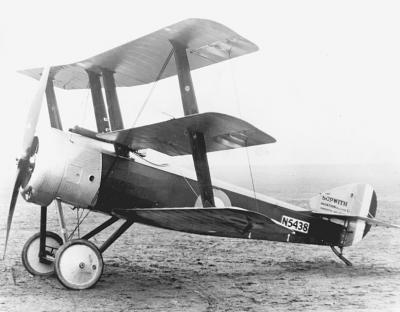 The Sopwith Triplane was perhaps more famous for the planes that imitated it than it was in its own right.
Peter M. Bowers Collection

January 1916 The first aero squadron to serve outside the United States, 1st Company, 2nd Aero Squadron, sails from San Francisco to the Philippines.

January 21, 1916 The Navy begins experimenting with aircraft radio at Pensacola.

February 12, 1916 The U.S. Post Office seeks bids for carrying the mail by air in Massachusetts and Alaska.

April 1916 The French use air-to-air rockets for the first time, firing Le Prieur rockets from a Nieuport fighter.

April 7, 1916 Captain B. D. Foulois and Lieutenant Dargue are fired on by Mexican troops at Chihauahua City.

April 20, 1916 American pilots form Escadrille Americaine to fight in France. The name is changed to Lafayette Escadrille in November after German protest (they did not want Americans to come into the war on the side of France).

May 18, 1916 Kiffin Rockwell scores the first victory for Escadrille Americaine.

May 28, 1916 The Sopwith Triplane makes its first flight.

June 18, 1916 H. Clyde Balsley of Escadrille Americaine is the first American to be shot down; he survives.

August 6, 1916 René Fonck gains his first victory; he will become the leading French ace of the war.

August 7, 1916 The Wright-Martin Aircraft Company is formed after the first of many mergers in the aviation industry.

September 2, 1916 The first German Zeppelin is shot down over England.

September 5, 1916 Leefe Robinson is awarded the Victoria Cross for destroying a German dirigible.

­October 28, 1916 Leading German ace Oswald Boelcke is killed in a midair collision with Erwin Böhme, a member of his own unit.