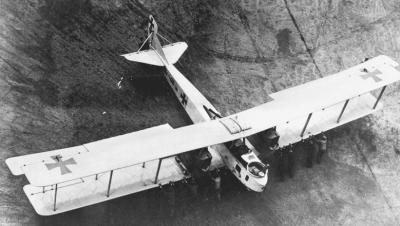 February 13, 1917 The Aircraft Manufacturers Association is formed to permit cross-licensing of patents for the war effort.

March 25, 1917 Billy Bishop gets his first victory (he will go on to become the leading surviving British ace with 72 victories).

April 5, 1917 The potent Bristol F2B "Brisfit" fighter moves into combat on the western front with the RFC.

May 1917 French squadrons begin to receive the SPAD XIII, a famous fighter.

May 20, 1917 The Curtiss-designed "Large America" flying boat is the first airplane to sink a German submarine (U-36).

May 25, 1917 Twenty-one Gothas raid England in the first mass bombing; 95 people are killed.

June 1917 The first of the German "Giant" bombers, a Staaken R VI, is delivered.

July 1917 Sopwith Camel fighters, the most successful planes based on number of kills (1,294), go into action.

July 21, 1917 Congress ap-proves a gigantic $640 million for S.C. Aviation Service. This amount is eight times more than all U.S. aviation allocations since 1898.

August 2, 1917 Squadron Commander E. H. Dunning lands a Sopwith Pup on the deck of the HMS Furious, becoming the first pilot to land on a moving ship. He is killed five days later trying to repeat this effort.

August 11, 1917 Billy Bishop earns the Victoria Cross for his role in an attack on an enemy airfield.

­September 1917 A prototype of the Handley Page O/400--the best British bomber of the war--flies for the first time.