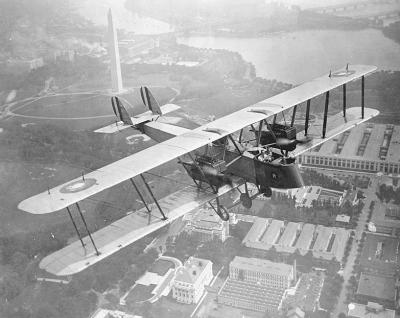 September 12-15, 1918 The Battle of St. Mihiel marks the largest deployment of aircraft in a single operation to date. Billy Mitchell commands 1,480 aircraft (including those in the service of French, British, U.S., and Italian air forces).

September 25, 1918 Eddie Rickenbacker earns the Medal of Honor for success in combat.

September 28, 1918 Renegade Frank Luke is killed after shooting down 3 balloons to bring his total score to 21. As the second-ranking American ace, he receives a posthumous Medal of Honor.

October 27, 1918 Major William Barker engages in an epic dogfight with 15 Fokker D VIIs. He scores three victories before he is shot down and wounded; he is awarded the Victoria Cross.

1919 Many military aircraft are modified for civil use as transports, mail planes, and personal craft.

1919 The first Lawson airliner is designed.

May 26, 1919 Robert H. Goddard's report on "A Method of Reaching Extreme Altitudes" is published by the Smithsonian Institution.

May 31, 1919 A Curtiss NC-4 completes the first transatlantic crossing.

December 10, 1919 Ross and Keith Smith fly a Vickers Vimy from England to Australia.

January 1920 Raymond Orteig offers a $25,000 prize to the first pilot who can make a nonstop flight from New York to Paris.

May 1, 1920 The U.S. Navy begins experimental work with all-metal structures.

­May 31, 1920 Italian pilots Arturo Ferrarin and Guido Masiero fly from Rome to Tokyo in SVA.9 biplanes.