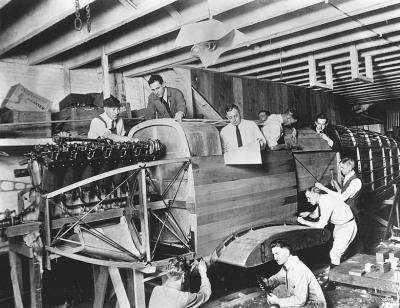 This carefully posed photo is truly history in the making, for it shows the building of the very first Douglas aircraft.
Peter M. Bowers Collection

September 8, 1920 A transcontinental mail route from New York to Chicago to San Francisco via plane/train is completed.

November 1, 1920 The Sperry Messenger is tested.

November 4, 1920 The U.S. Navy continues a series of bombing tests against the obsolete battleship USS Indiana.

1921 The Soviets establish a laboratory for research on solid-propellant rockets.

February 24, 1921 Lieutenant William D. Coney completes a solo transcontinental flight from Rockwell Field, San Diego, to Jacksonville, Florida, in 22 hours, 27 minutes. On March 25, 1921, he is mortally injured in a crash on the return flight.

February 24, 1921 The Douglas Cloudster, the first in a long line of Douglas aircraft, flies.

May 1921 The McCook Field-designed, Boeing-built G.A.-X flies for the first time. The armored, twin-engine triplane attack bomber, with eight machine guns and a cannon, is a failure.

­June 9, 1921 The National Advisory Committee for Aeronautics (NACA) authorizes the construction of a wind tunnel at Langley Aeronautical Laboratory.