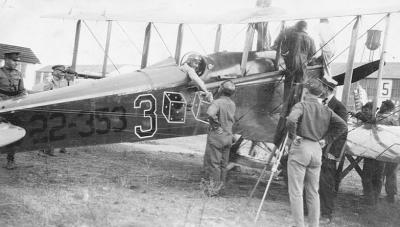 September 14, 1922 The L.W.F. Owl, the largest plane yet built for air service, makes its first flight.

September 27, 1922 Radar is demonstrated at the Naval Aircraft Radio Lab.

September 27, 1922 The Navy has its first mass torpedo practice against live targets by Torpedo One; 8 hits out of 17 launches.

October 20, 1922 Harold R. Harris makes the first emergency parachute jump, leaping from a Loening M-8 after a collision with a Fokker monoplane.

October 26, 1922 Lieutenant Godfrey DeChevalier makes the first landing on the USS Langley in an Aeromarine 39-B.

November 6, 1922 The prototype Dornier J Wal makes its first flight. It will become one of the most important flying boats of the era.

December 27, 1922 Japan commissions its first aircraft carrier, Hosho. It is one of only a few Japanese ships to survive World War II.

February 21, 1923 The de Bothezat helicopter achieves sustained flight for 2 minutes and 45 seconds at an altitude of 15 feet.

March 5, 1923 An auxiliary jettisonable gas tank is fitted to a Thomas-Morse MB-3A fighter. This extends the aircraft's range to 400 miles.