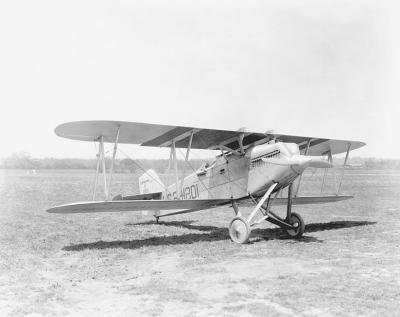 May 14, 1923 A prototype Cu­rtiss PW-8 fighter is received by the USAS, the beginning of a long line of Curtiss biplane fighters.

May 26, 1923 Lieutenant H. G. Crocker completes a nonstop, transcontinental, south to north flight in a DH-4B, flying from Houston, Texas, to Gordon, Ontario, in 11 hours, 55 minutes.

August 21, 1923 Navigation beacon lights between Chicago and Cheyenne are completed.

September 28, 1923 Lieutenant David Rittenhouse wins the Schneider Trophy for the United States in a Navy Curtiss CR-3 racer at 181 miles per hour.

October 6, 1923 The Navy's Lieutenant Alford Williams wins the Pulitzer Trophy in a Curtiss R2C-1 racer at 243.68 miles per hour.

October 10, 1923 The Shenandoah, the first dirigible to use helium, is christened.

The USS Shenandoah saw the derigible as a sensible means of reconnaissance.
Peter M. Bowers Collection

December 13, 1923 Lawrence Sperry crashes his Messenger in the English Channel. The plane is recovered, but Sperry's body is never found. ­