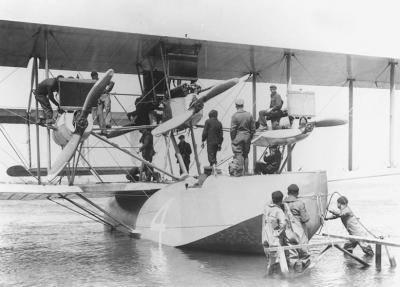 After witnessing the flight of the Montgolfier balloon in Paris in 1783, Benjamin Franklin instantly remarked about the possible use of balloons in war. The Wright brothers knew from the start that their invention would have military uses, and they hoped that the flying machine might make war impossible by removing the element of surprise.

By 1913, aircraft had been used combat in Mexico, North Africa, and the Balkans. A­lthough they scarcely removed all elements of surprise, they did give patriotic young men the chance to vent their wrath upon the enemy by dropping bombs and firing pistols.

­When World War I began on August 1, 1914, every major nation--except the United States --had significant aerial components in their military forces. By 1914, Germany and France had each expended the equivalent of $26 million on their respective air services (measured in 1914 dollars). Russia had spent $12 million; Great Britain is estimated to have spent $9 million. The United States had spent only $400,000. U.S. spending exceeded only Austria-Hungary, which had expended just over $318,000.

France began the war with some 140 aircraft for 21 squadrons. Great Britain's Royal Flying Corps (RFC) had roughly 180 aircraft, about half of which were unfit for service. The Royal Naval Air Service (RNAS) had 50 aircraft and fewer pilots. Germany went to aerial war with its characteristic efficiency. It could put 250 first-line aircraft in the field, with a pilot for each, along with no less than 9 dirigibles. Its Austro-Hungarian ally could field just under 50 aircraft. Imperial Russia had 250 ill-maintained aircraft and 14 dirigibles spread widely across the country.

­These wood and fabric aircraft were derived from civil models, though some had been purchased to primitive military specifications in regard to equipment. They were almost evenly divided between monoplanes and biplanes, with approximately the same performance characteristics--a top speed of 60 or 70 miles per hour, a stall speed of 50 to 60 miles per hour, an endurance of an hour or two, and the capability to carry a pilot and an observer but little or no armament. They were fragile, cranky, unreliable, difficult to fly, and subject to structural failure if pressed too hard.