Colin Furze, the same extreme bicycle enthusiast who three years ago created a jet bike fueled by liquid propane and dubbed it "the most dangerous unsafe bike EVER," is back with a working hoverbike.

Outfitted with two massive propellers to provide lift, Furze's hoverbike uses the same physics as the drones increasingly ubiquitous in today's skies. But as he points out in the full video of his flight, it has accelerators, but neither brakes, steering mechanism nor seat.

"I had to learn to ride it, try and control it," he says in the video. "which of course didn't go all that smoothly."

But building it in the first place was the point, says Furze, who's a prominent online evangelist for DIY — or at least try-it-yourself — engineering projects.

Before he became an Internet sensation due to his inventions, Furze's primary trade was as a plumber, which provided him with his knowledge of construction and physics.

"The things I make are made with tools that proper engineers would laugh at," Furze writes on his website, "but I'm proof you don't need an expensive lathe and huge welder to create something amazing."

Want to see how the hoverbike came together? Check out Furze's page about the project, and watch the assembly process in this video:

Now That's Cool
Not up for building your own hoverbike like Furze? The company Aerofex says it will have a commercial version of its Aero-X hoverbike, which holds two riders, available next year.

TV Antiheroes Like Cersei and Dexter Enthrall Us. Here's Why

With More Drones in Our Skies, We're Going to Need Droneports

The Closest Thing to a Real Hoverboard: Electric Skateboards Get Legal, Hacked 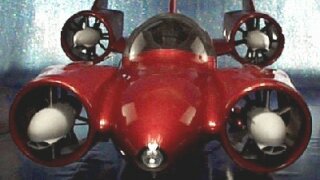 How Flying Cars Will Work