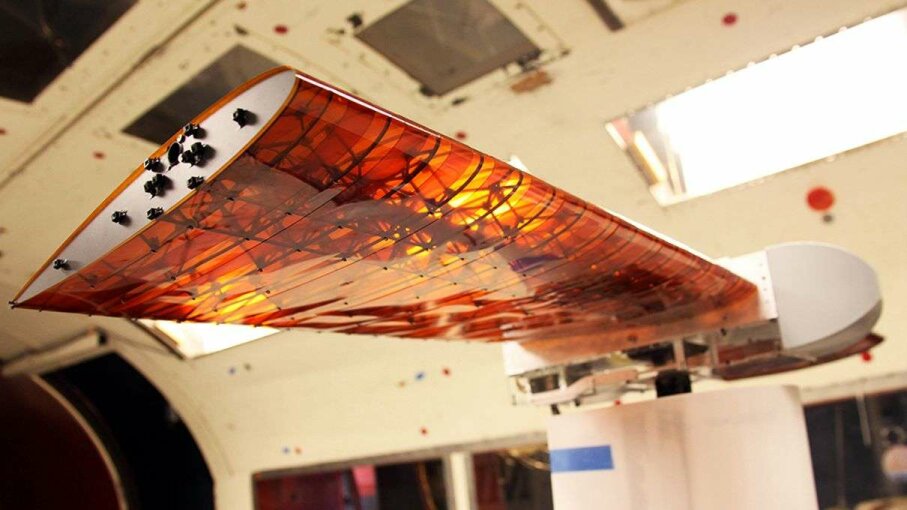 The shape of an aircraft's wings influences how efficiently a plane flies, and how much fuel its engines need to propel it through the air. But there's no one perfect shape ideal for every speed or altitude. That means that a conventional rigid wing, like modern ones sporting movable flaps and ailerons to direct air flow, represent compromise. But a bendable, flexible wing that could adapt to different surface configurations depending upon the situation? That would be a 21st-century aircraft designer's dream.

Now — thanks to the work of researchers at NASA, Massachusetts Institute of Technology and the University of California's Santa Cruz, Berkeley and Davis campuses — a shape-changing, morphing airplane wing is a reality.

In an article in the journal Soft Robotics, the researchers describe their new wing. It comprises many tiny, lightweight pieces called digital materials, which can assemble themselves into a virtually infinite assortment of shapes — almost the way that you can build either a replica of the Taj Mahal or the starship Enterprise out of the same Lego blocks.

Past attempts to build a bendable wing have relied upon mechanical control structures inside the wing to change its shape. But as an MIT press release explains, that would add so much weight to the wing as to cancel out any possible gains in fuel efficiency.

But the new morphing wing design ingeniously gets around that problem. The digital materials are manipulated by two small motors that apply a twisting pressure to each of the wing tips. The wing, which would be built by a construction crew of tiny robots that would crawl along exterior and interior surfaces, is "lightweight, tunable, and actively deformable," write the researchers.

"We make the whole wing the mechanism. It's not something we put into the wing," says Neil Gershenfeld, director of MIT's Center for Bits and Atoms.

Benjamin Eric Jenett, an MIT graduate student who worked on the project, explains via email that the new wing system could make a significant impact in commercial aviation, because it would improve fuel efficiency and be easy to repair.

In fact, the team has already put a pair of the morphing wings onto an aircraft body and run it through a wind tunnel at NASA's Langley Research Center, where one of the scientists, NASA's Kenny Cheung, told Wired that the mockup "maxed out," performance-wise.

The researchers hope to fly a "fully morphing" miniature aircraft possibly as much as 6.5 feet (193 centimeters) long — in the next year or so, and then scale up from there, Jenett explains. But it may be a while until airliners are flying with morphing wings.

"Integrating into commercial aircraft is incremental for safety reasons," he says. "It typically takes around 30 years for new system architectures to become operating passenger aircraft."

The wing design is based on a system of tiny, lightweight subunits that could be assembled by a team of small specialized robots
Kenneth Cheung/NASA

Jarett believes it's conceivable that using swarms of tiny robots to assemble and morph the wing may change how aircraft are manufactured. Up to this point, planes pretty much are put together by hand, he explains. The new process could also influence how spacecraft are built.

The bendable wing technology may also change the way that aircraft fly. Cheung also said he envisioned future aircraft that actually flapped their wings like birds, to become even more efficient.

Now That's Interesting
The same approach used to build bendable aircraft wings could also create robotic arms and legs whose shapes could bend continuously along their entire length, rather than just having a fixed number of joints.