There was a time, back in the 1960s, when many people assumed that it would become routine to have breakfast in New York City and a late lunch in Paris, thanks to supersonic airliners such as the Concorde. That aircraft, jointly developed by British and French aerospace companies, could cross the Atlantic in as little as three hours, less than half of the time that conventional subsonic jet airliners required.

But after its introduction in 1969, supersonic jet travel never really caught on. One problem was that the Concorde, which flew at a maximum speed of 1,354 miles per hour (2,172 kilometers per hour, or Mach 2), used several times the fuel as a conventional jet. This made it expensive to operate and made ticket prices unaffordable for most travelers. But an even bigger problem was the noise that the supersonic plane made. Its sonic boom — the shock waves created as if traveled over an area as twice the speed of sound — reportedly reached 135 decibels, about a third more than an ear-splitting rock concert.

The Concorde was so intolerably loud that Federal Aviation Administration officials banned the aircraft from flying over U.S. territory at supersonic speeds. Though the Concorde fleet remained in service for more than three decades, the last one of the planes was retired from service by British Airways in 2003.

But now, though, it looks as if NASA is trying to revive supersonic air travel — and this time, the aim is not just to make the aircraft fast, but to make it quiet as well. At a recent event at Ronald Reagan Washington National Airport in Arlington, Virginia, the agency announced that it was awarding a $20 million contract to longtime partner Lockheed Martin for preliminary design work for an aircraft that will use Quiet Supersonic Technology. QueSST, as the concept is being called, ideally will result in an airliner that's quiet enough to fly in U.S. airspace without busting the eardrums of people on the ground.

The goal, NASA's Bolden explained, is to produce an aircraft whose boom is more like "a soft thump" as it travels over populated areas.

"In scientific terms, I think that's what they call a big deal," Bolden joked. Watch a full video of the announcement below.

GE Aviation and Tri Models, a builder of wind tunnel models, also are involved in the project.

Earlier Attempts to Quiet Down

As this 2005 report from NASA archives details, the government has been working on ways to make supersonic flight quieter for a long time, based on the belief that by altering an aircraft's shape, the shock wave "signature" could be altered, eliminating a lot of the boom.

An earlier concept of a quieter supersonic jet from 2015.
NASA/Lockheed Martin

Back in 2003, government researchers tested a Northrop Grumman F-5E aircraft whose contours had been lengthened and reshaped to create a "flat top" signature whose waves would produce lower decibel levels once they propagated through the atmosphere to the ground. The resulting boom was a third quieter.

In 2007, another NASA program added a 24-foot-long lance-like spike, made of composite materials, to the nose of a research aircraft. When the aircraft reached supersonic speed, the spike actually broke up the boom into three smaller shock waves, which traveled parallel to one another on the way to the ground. The resulting noise was significantly lower also.

Bolden said that the contract is part of NASA's effort to make air travel "cleaner, greener, safer and quieter" in addition to speeding up air travel. According to NASA associate researcher Jaiwon Shin, who also spoke at the event, the researchers' aim is to cut the amount of fuel that an airliner uses by half.

Now That's Interesting
In the late 1960s, the U.S. government funded an effort by Boeing to develop a U.S. supersonic airliner to compete with the Concorde. The design featured a needle-shaped nose that would lower during takeoff and landing for improved visibility. The prototype hadn't yet been completed when federal funding was cut off in 1971, killing the project.

Would You Rather Eat Cruz or Clinton? PancakeBot Can Make Both 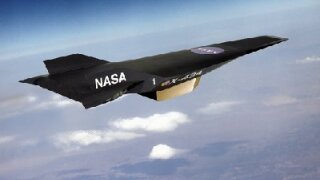 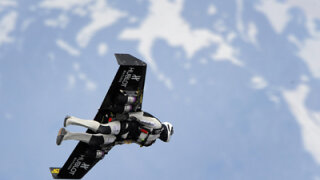