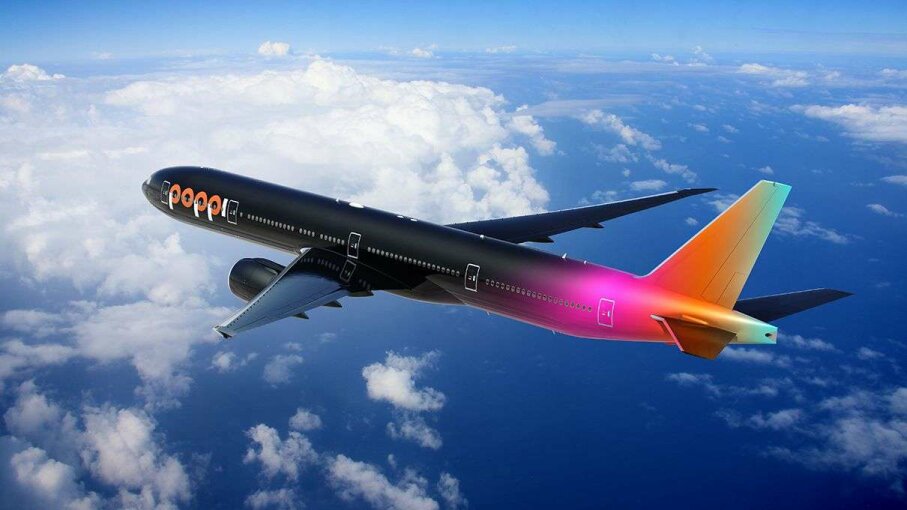 Poppi is not a real airline, but Poppi certainly has ideas about how air travel could innovate to benefit both passengers and industry alike. Teague

Imagine that 10 years from now, you're a passenger on a new airline called Poppi, which has set out to reshape and innovate the air travel industry in the same way that Uber disrupted the cab industry and lodging-sharing company Airbnb arose as an alternative to hotels. It's going to be a very different experience from what air travel is today.

For one thing, there's no need to cram as much as possible into your carry-on bag or face a long wait at the baggage carousel. Instead, Poppi workers attach radio-frequency identification tags to your suitcases to keep track of your stuff electronically, and then deliver it at the other end to your hotel or car trunk.

Teague's "concept airline" Poppi suggests uniform luggage that can lock into chairs and be delivered directly to a passenger's hotel or ground transportation.
Teague

What if you don't like your seat assignment or want to fly at a different time? You don't have to pay a fee to change your reservation. Instead, you simply use a free smartphone app to swap your ticket with another traveler who's also a member of Poppi's membership club.

And forget about the difference between first class and coach — on Poppi flights, passengers are grouped according to what sort of consumer experience they choose to have. If you're into movies, you can sit in cinema class, and watch movies or other entertainment content created exclusively for their airline, through partnerships with film and TV production companies. Or else you can sit in promotional class, where makers of various consumer brands vie for the chance to get you to try out their products.

Tired of squinting at a seatback screen? What if airlines could customize your flight experience to your interests?
Teague

If that sounds like a fantasy, well, it is. Poppi isn't an actual airline, but rather a marketing concept recently dreamed up by Teague, the Seattle-based design consulting firm that created the iconic interior for Pan Am Airways' Boeing 747 back in 1970, and more recently helped craft the Boeing Dreamliner's spacious cabin.

As Teague brand strategist Devin Liddell explains via email, all of Poppi's traveler-pleasing features are ones that would be possible for existing airlines to copy. (Also, it's far too expensive to simply launch an airline, so innovation presented in concept form allows for greater flexibility and creativity.)

"We anchored every idea we included in Poppi to two basic criteria: happier passengers, and happy bottom lines for airlines," Liddell says. "Because we didn't want Poppi to be blue-sky thinking with no attachments to the realities airlines have to work within, which are formidable. Instead, we wanted to visualize, in a really bold way, other paths forward that airlines could implement relatively quickly."

Poppi's proposal to eliminate bulky carry-on luggage would free up space in the main cabin.
Teague

Those are just a few of industry visionaries' ideas for transforming an airline industry whose customers have grown discontented about paying fees for everything from baggage to snacks, sometimes endure lengthy delays, and find themselves jammed into crowded planes. On the American Consumer Satisfaction Index, airlines earn a score of 71 on a scale of 100 — significantly lower than the ratings people give to their cars, cell phones and household appliances, and just about everything else. It's up to industry itself to innovate and satisfy passengers, shareholders and employees alike.

Now That's Interesting
Another of Teague's speculative design projects imagines a sharing option that would eliminate the need for luggage — sort of an Airbnb for attire. No need to pack that bulky parka, or remember a bathing suit for a mid-winter getaway! Instead of packing personal outfits, travelers will pre-order a wardrobe of clothes appropriate for the locale that would be waiting for them at their destination. When it's time to head home, travelers will return the clothes to the airline, which would launder them and store them until they're needed by another passenger.