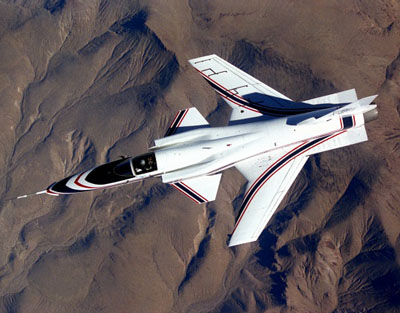 The X-29 featured one of the most unusual aircraft designs in history.
Image courtesy NASA

Designers of planes with variable-geometry wings also had to consider agility. While sweeping the wings back made for more stable aircraft at high speeds, forward-swept wings allowed the aircraft to be exceptionally agile, an especially desirable characteristic for fighter aircraft. The German Ju-287 was the first aircraft with forward-swept wings, but the X-29 is the most well-known example [ref]. While this drastic configuration rendered the X-29 unstable, computers could control the aircraft with fly-by-wire flight control systems. The next swept-wing aircraft incorporated aspects of the previous designs.

In the 1990s, Northrop Grumman tested variable-geometry wings on another plane with the "Switchblade" nickname. The Northrop Bird of Prey had three wing configurations:

Patents for the variable-wing geometry are public knowledge, and there were reports of a test squadron flying these aircraft. Documents showing the existence of a Bird of Prey test craft were declassified, but this declassified craft did not incorporate "swing wing" technology. Details of the three-position "Switchblade" Bird of Prey remain classified.

The Defense Advanced Research Projects Agency (DARPA) is the Pentagon's high-tech military technology research branch. It has allocated $10.3 million to Northrop Grumman to develop a Switchblade preliminary design by late 2007. The company beat two other proposals for the design project, and work will proceed at Northrop Grumman's El Segundo, California headquarters. Northrop Grumman plans a scaled-down test model with a 40-foot wingspan for 2010, with a full-size, fully-functional Switchblade ready for flight in 2020. As the project moves into the scale and full-sized phases, costs will likely escalate into the billions of dollars.

Next, we'll look at how wing position affects a plane's performance and learn more about the Switchblade.

Thanks to Mike Melchior for his assistance with this article.