Browse the article Windowless Airplanes: The Future of Flight? 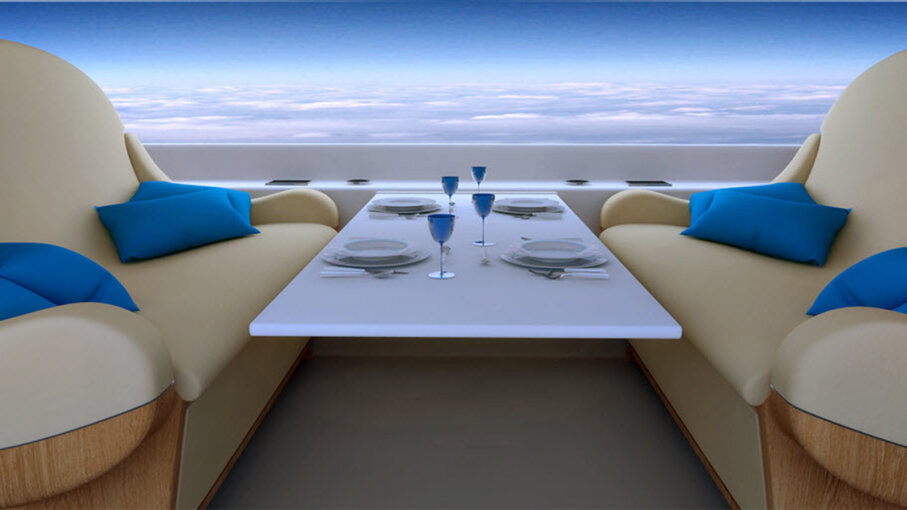 The Spike S-512 supersonic jet, still in development, will offer incredible displays of the outside world with the option to watch a movie or work from your laptop — all on full-length high-definition displays. Spike Aerospace

When commercial air travel first started to catch on in the 1930s, one of the big attractions for passengers was the chance to stare out the window at the landscape from a startlingly new perspective, high above it. Observing rivers, deserts, farms and city skylines "served as endlessly fascinating entertainment," wrote Daniel L. Rust in "Flying Across America," his 2012 history of air travel.

Many of us still like to gaze out in wonder from those little portals. A survey by Quartz in 2014 found that more than half of Americans prefer having a window seat on an airline, though people who fly more than once a year are more evenly split.

That's why you may be surprised to learn that for decades, aircraft designers have been contemplating planes with video screens instead of passenger windows. In 2014, for example, the UK-based Centre for Process Innovation unveiled a design for a windowless airliner, in which the entire interior of the cabin would be lined with thin, flexible high-definition video screens that would provide lighting and entertainment, as well as a more expansive view of the outside.

Last April, Dubai-based airline Emirates debuted Boeing 777s with enclosed private suites equipped with "virtual windows" to provide a view of the outside from the middle of the plane.

"The virtual windows were installed for First Class suites located in the middle aisle as they are fully enclosed suites with floor-to-ceiling doors and passengers would not be able to view the windows on the side of the aircraft," an Emirates public relations official, Jerome Demare, explains via email. "These virtual windows project the view from outside the aircraft using real time camera technology. The cameras are placed in strategic locations to offer passengers a real-time view outside the aircraft. The actual view is determined by which side of the aircraft the entrance to the suite is; right or left, that is the view that will appear in the center suites. The cameras are high resolution devices which offer a very clear, wide view of the outside. The virtual window provides a sharp, clear, realistic view of what's outside – anecdotally, passengers have told us they prefer the view to that of 'real' windows."

Emirates' virtual windows got a rave review from travel website The Points Guy.

In a BBC News article, Emirates president Sir Tim Clark was quoted about the future possibility of planes without windows, but Demare said that "there are no current plans for a windowless airliner."

But an aircraft manufacturer does aim to go windowless, on a smaller scale. For the past several years, a privately owned Boston-based company, Spike Aerospace, has been working to develop the Spike S-512, an 18-passenger supersonic business jet filled with cutting-edge technology that will enable it to cut travel times significantly, without excessive fuel consumption and loud sonic booms. And it will do all that without passenger windows.

The aircraft's design will include a "multiplex digital cabin," Spike Aerospace president and chief executive officer Vik Kachoria said in a phone interview. Instead of gazing through the usual small portal windows, passengers will be able to watch a pair of 20-foot-long (6.096-meter) digital video screens that will stretch the length of the cabin on either side of the aircraft. Multiple ultra-high definition cameras mounted on the exterior of the plane will provide 4K video, which the aircraft will stitch together, using special software developed by Spike Aerospace.

Kachoria says the system will provide "beautiful, full-length camera feeds from various angles. Whatever image you want to see can be displayed. You can see left or right, in front of the plane or behind it, looking down or up into the sky. It's more of a panoramic view than the very limited view that you see out of a porthole window."

The Benefits of Windowless Airplanes

Eliminating conventional acrylic glass windows from the aircraft has other advantages as well, Kachoria says. By insulating the fuselage as well, for example, it would be possible to reduce noise from the engines. It also would strengthen the aircraft and make it safer. "Wherever you have a hole is a structural weakness," he said. "You're reducing any weak spots." (Airliner windows have to be designed to be tough enough to withstand the stresses of flying, as this 2003 Federal Aviation Administration circular details.)

Besides providing a more expansive view, the system also will enable passengers to choose other content. It also will be capable of utilizing geolocation and displaying augmented reality data about the landscape that the plane is flying over. "We have partners working on content for the screens," Kachoria says.

If they're not interested in the view, passengers also will be able to use the screens to do other things. "You can watch videos or it, or do a PowerPoint," Kachoria says. "You can put up a movie if you want, or just dim the lights."

The aircraft's pilots still will have a conventional window in the cockpit, as well as synthetic vision technology, according to Kachoria.

Kachoria says that Spike Aerospace has several more years of engineering to complete on the aircraft, and then has to go through the testing and certification process. He envisions delivering the first jet without conventional passenger windows in 2025.

Initially, only corporate executives and people wealthy enough to afford a private jet will be able to enjoy Spike Aerospace's windowless flying experience. But Kachoria expects that the innovative technology eventually will find its way into regular airliners as well.

Now That's Interesting
Back in the mid-1990s, NASA actually built and flew an experimental Boeing 737 with a windowless cockpit equipped with digital and infrared cameras and video monitors.