Durin­g peak air travel times in the United States, there are about 5,000 airplanes in the sky every hour. This translates to approximately 50,000 aircraft operating in our skies each day. How do these aircraft keep from colliding with each other? How does air traffic move into and out of an airport or across the country?

The task of ensuring safe operations of commercial and private aircraft falls on air traffic controllers. They must coordinate the movements of thousands of aircraft, keep them at ­safe distances from each other, direct them during takeoff and landing from airports, direct them around bad weather and ensure that traffic flows smoothly with minimal delays.

When you think about air traffic control, the image of men and women in the tower of an airport probably comes to mind. However, the air traffic control system is much more complex than that. In this article, we will examine air traffic control in the United States. We'll follow a flight from departure to arrival, looking at the various controllers involved, what each one does, the equipment they use and how they are trained.

­The United States airspace is divided into 21 zones (centers), and each zone is divided into sectors. Also within each zone are portions of airspace, about 50 miles (80.5 km) in diameter, called TRACON (Terminal Radar Approach CONtrol) airspaces. Within each TRACON airspace are a number of airports, each of which has its own airspace with a 5-mile (8-km) radius.

Up next, we'll check in with a commercial airline flight before it takes off.

Suppose you are flying across the United States, perhaps from New York to San Francisco. Your flight, like every other commercial airline flight, follows a typical profile:

While you prepare for your flight by checking your bags and walking to the gate, your pilot inspects your plane and files a flight plan with the tower -- all IFR pilots must file a flight plan at least 30 minutes prior to pushing back from the gate. Your pilot reviews the weather along the intended route, maps the route and files the plan. The flight plan includes:

Your pilot transmits this data to the tower.

Example of a flight progress strip

Once the flight plan has been approved, the flight data person gives clearance to your pilot (clearance delivery) and passes the strip to the ground controller in the tower.

Once your plane takes off, your pilot activates a transponder device inside the aircraft. The transponder detects incoming radar signals and broadcasts an amplified, encoded radio signal in the direction of the detected radar wave. The transponder signal provides the controller with your aircraft's flight number, altitude, airspeed and destination. A blip representing the airplane appears on the controller's radar screen with this information beside it. The controller can now follow your plane.

The departure controller is located in the TRACON facility, which may have several airports within its airspace (50-mile/80-km radius). He or she uses radar to monitor the aircraft and must maintain safe distances between ascending aircraft. The departure controller gives instructions to your pilot (heading, speed, rate of ascent) to follow regular ascent corridors through the TRACON airspace.

Once your plane has left TRACON airspace, it enters a sector of the ARTCC airspace, where it is monitored by at least two air traffic controllers. The radar associate controller receives the flight-plan information anywhere from five to 30 minutes prior to your plane entering that sector. The associate controller works with the radar controller in charge of that sector. The radar controller is in charge of all air-to-ground communication, maintains safe separation of aircraft within the sector and coordinates activities with other sectors and/or centers. The controllers must monitor the airspace at high altitude (above 24,000 ft/7320 m) and low altitude (below 24,000 ft). The center controllers provide your pilot with updated weather and air-traffic information. They also give directions to your pilot regarding such aspects as speed and altitude to maintain a safe separation between aircraft within their sector. They monitor your plane until it leaves their sector. Then they pass it off to another sector's controller.

Another controller, called the radar hand-off controller, assists the radar and associate radar controllers during times of heavy traffic, watching the radar screen and helping to maintain smooth air-traffic flow.

While you are enjoying your meal, snack, in-flight movie or the view outside the window, your plane gets passed from sector to sector and center to center. In each sector, center controllers radio instructions to the pilots. The path of your plane may have to be changed from the original flight plan to move around bad weather or avoid a congested sector. Your pilots may request a change in altitude to avoid or reduce turbulence. This back and forth between pilots and center controllers continues until you are about 150 miles (241 km) from San Francisco (your destination). At this point, the center controller directs all planes flying into San Francisco to move from high altitudes to low altitudes and merges the descending aircraft into a single file line toward the airport. The controller gives instructions to your pilot, such as changes in heading, speed and altitude, to place your plane in line with these other aircraft. Depending on traffic conditions, the controller may have to place your plane into a holding pattern, which is a standard route around each airport, where you wait until the airport can handle your arrival. The controller continues to give directions to your pilot until your plane is within TRACON airspace. 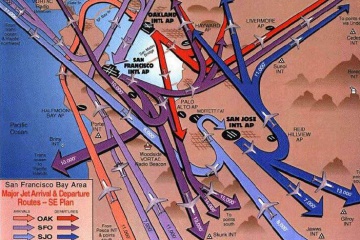 Departure and approach corridors for eastward air traffic to and from airports in the San Francisco Bay Area TRACON airspace. (Click on the image for a larger view.)
Image courtesy Federal Aviation Administration

The ground controller watches the runways and taxiways and uses ground radar information to ensure that your taxiing aircraft does not cross active runways or interfere with ground vehicles. He or she directs your plane to the appropriate terminal gate. Ground personnel from the airline use hand signals to assist your pilot in parking the airplane at the gate. 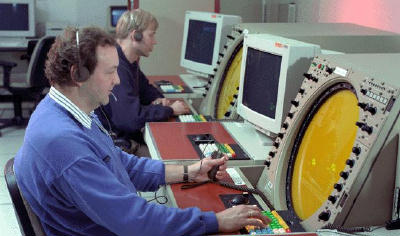 What does it take to be an air traffic controller? To be a ground controller, you have to memorize the position of aircraft on the runways and taxiways with a single, short glance. Local, TRACON and ARTCC controllers must be able to think and visualize in three dimensions. All controllers must be able to gather information from what they hear, make decisions quickly and know the geography of their own airspace, as well as that of others. They must be able to read and interpret symbols as well as predict the whereabouts of aircraft from course headings and speeds, and they must be able to concentrate intensely. To test your skills as an air traffic controller, see pages 17 through 67 of the "Gate to Gate" CD ROM: Student Activity and Career Guidance Package.

Air traffic controllers at all levels are employed by the FAA. To become an air traffic controller, you must apply through the federal civil-service system and pass a written test that assesses your abilities to perform a controller's duties. Abstract reasoning and 3-D spatial visualization are tested on the exam. Applicants must have three years of work experience, a four-year college degree or some combination of the two.

If you are accepted into the training program, you will attend the FAA Academy in Oklahoma City, Oklahoma, for seven months of training. While there, you will learn the air traffic control system, equipment, regulations, procedures and about aircraft performance. You will need to pass a final examination before you graduate.

After graduation, you will accumulate work experience at various sites across the country, from airport towers to ARTCCs. You must be certified for various positions, such as ground controller, associate radar controller and radar hand-off controller. You will be required to pass annual physical examinations, semi-annual performance examinations and periodic drug screenings. Air traffic control positions are highly competitive jobs, and the controller workforce is relatively young (most were hired after the air traffic controller strike in the 1980s, when President Ronald Reagan ordered that all striking controllers be fired).

Air travel has increased dramatically since the U.S. federal government deregulated the airline industry in the 1970s. However, the construction of new airports and runways has not kept pace with the increase in air traffic. This has put excessive pressure on the air traffic control system to handle the nearly 50,000 flights per day, a number projected to increase in the near future. To handle these flights and avoid delays and collisions, the FAA and NASA have developed modern software, upgraded existing host computers and voice communications systems and instituted full-scale GPS (global positioning system) capabilities to help air traffic controllers track and communicate with aircraft. The FAA is currently redesigning U.S. airspace to make more room for increased traffic. For example, the U.S. military has freed previously restricted airspace off the coast of North Carolina for use by commercial aircraft. These efforts should help ease traffic and minimize delays in the short term; however, increasing airport capacity by building new runways and airports is ultimately the way to handle the problem.

For more information about air traffic control and related topics, check out the links on the next page.

In the event of an air crash or runway incursion (two planes on a collision course), the National Transportation Safety Board (NTSB) investigates. The NTSB team reconstructs the air-traffic services given to the plane, examines radar tracking data and studies transcripts of the controller-pilot conversations. See NTSB: The Investigative Process for details.