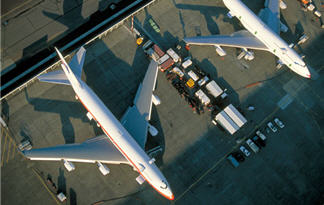 Can airlines go green? Check out these flight pictures to learn more.
DCI

The downside to the most environmentally friendly ways of getting around is that they tend to be on the slow side. Walking, biking and riding trains are great for the planet, but sometimes you need to get around the world quickly- and that often involves crossing oceans. The airline industry is one of the largest contributors to global carbon emissions, but it's possible to fly and do minimal damage to the environment.

First of all, figure out whether it's really necessary to fly. If it's for a business trip, maybe you can make do with a phone call or video conference. If it's for pleasure, consider the element of discovery that a train ride can add to a journey- you'll see a lot more than you do from an airplane. But if you only have one week of vacation and your heart is set on Europe, go with an airline that's as concerned about the environment as you are.

Airplanes become more fuel efficient with every generation, and there are plenty of ways old planes can be spruced up. Winglets can be added on to the end of wing's, reducing drag and reducing fuel consumption by 6 percent.

Just about every airline has made its planes lighter through creative means, like installing carbon fiber seats, cutting back on magazines, buying lighter beverage carts and trashing in-flight phones.

When it comes to the best, Southwest is the world's most efficient airline, saving 274 pounds of CO2 per flight. Continental, Jet Blue and Virgin Atlantic are also good choices.

What You Can Do

Short of amping up your exercise regimen before traveling, there's not much you can do to make an airplane lighter. You can, however, bring your own stuff like a pillow, water bottle, and utensils to cut down on the disposable versions the airline will throw away after you use them. Avoid using the bathroom if possible, and definitely buy carbon offset credits to help clean up the atmosphere and your green conscience.

These days, just about everyone accepts that we're running out of fossil fuels, and the airline industry isn't slacking in looking for alternatives. Electric aircraft and solar-powered planes have been successfully flown, but are a long way from commercial applications.

Biofuels are more promising. KLM flew a passenger jet this summer from the Netherlands to Paris on biofuel (regrettably gathered from meat precessing operations). EADS, the owner of the Airbus, has flown planes running on algae biofuels, and it working on a hypersonic jet that will fly at Mach 5 and be powered by biofuels made from seaweed.