Wanted Since the 1950s: Airport Sites 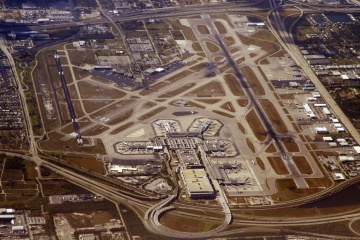 From this aerial view, you can see how commercial airports may require a little bit of room to spread out.
iStock/Thinkstock

Commercial airports require huge amounts of land for runways and other facilities. As a result, few have been built in North America and Europe since the 1950s because metropolitan areas simply don't have any suitable sites. Even airports built on the outskirts of a city in the 1950s now find themselves hemmed in by urban and suburban development. This leaves planners with no choice but to renovate existing structures or expand within long-established property lines.

With that said, some cities have managed to add a commercial airport in the last couple of decades. Denver, for example, began construction of its international airport in 1989 and, after numerous construction delays, opened the facility in February 1995. Since then, it's grown to be the fifth-busiest airport in the United States, with more than 145,000 passengers passing through its gates each day [source: Denver International Airport].

Building a commercial airport on the scale of Denver's requires years of planning and a number of complex decisions. Here are some of the things airport planners must consider:

Once a site is chosen, planners must then design and lay out the airport's major structures. Much of their efforts center on how to best configure runways and terminals for the most efficient flow of traffic on the ground and in the airspace during departures and landings.