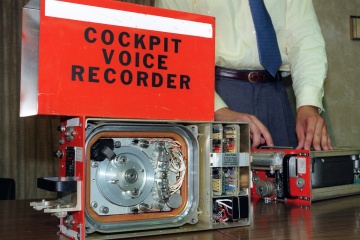 The 2014 disappearance of Malaysia Airlines Flight 370 revived a recurring debate over whether airplane black boxes were keeping pace with the times. In our big-data-and-cloud-storage era, when satellites and cell towers pump everything from sports to stock prices to our smartphones, why do we still lock away critical data on a box that can go down with the plane?

It wasn't a new argument. Similar questions cropped up during attempts to locate the black box from Air France Flight 447, which crashed into the Atlantic Ocean in 2009, killing 228 people. Searchers spent two years hunting down that device, which lay so deep -- 12,800 feet (3,900 meters) -- that rescuing it required a special robot sub. Had not Honeywell's black box surpassed its required specs, the device would have succumbed to water and pressure long before. MH370 is believed to lie thousands of feet deeper still [sources: Adler; Paur; Washington Post].

But the Malaysia Airlines flight raised another potential weakness, as it soon became clear that data vital to understanding the flight's fate had likely disappeared long before the plane. To see why, let's look at how black boxes work [source: Adler].

The flight data recorder (FDR) archives snapshots of aircraft performance based on data fed to it from all over the plane. Every few seconds, a flight data acquisition unit info-dumps at least 88 different factors -- heading, fuel, altitude, airspeed, vertical accelerations, throttle and flight-control positions, wing flap movements, that sort of thing -- to the FDR. Some commercial airlines track hundreds or even thousands of data points. Just what info the recorder gathers depends on whether the plane is taking off, landing or cruising, and the update rate can kick into higher gear during a crisis [sources: Adler; Demerjian; Kavi; National Geographic].

But while the data recorder operates on a 25-hour loop, the voice recorder overwrites itself every two hours. In a case like MH370, that would wipe out the key moments of the flight -- specifically, the cockpit chatter that took place during the plane's course change [sources: Millward; Wald].

Just because a system has a few flaws doesn't mean you chuck it for something new. All systems have failure points; the art of engineering, and of good policy, lies in balancing them against more useful features. Does the black box need a 21st-century update? And, if so, is cloud storage practical, affordable, reliable and secure enough to supplement or replace the status quo?

Thinking Inside the Box

Before we throw the black box out with the bathwater, let's look at what factors have made the device such a success since its inception.

First, let's clear up a few problems with the name: A black box is not black, it's often not a box and it contains more than one recording device (although they occupy a single, rugged unit). Even before airline standards required an easier-to-spot orange or yellow paint job, Boeing planes packed theirs in yellow spheres, and British planes carried theirs in so-called "Red Eggs." Today, U.S. Federal Aviation Administration regulations still allow spherical, cylindrical and domed recorders, as long as they're big enough to pick out of a plane's debris [source: Engber].

Black boxes have come a long way since 1953, when Australian researcher David Warren ginned up his "Flight Memory Unit" to probe frequent crashes of the world's first jet-powered airliner, the De Havilland Comet. From wire and foil recorders that captured only a handful of flight data, they moved on to magnetic tape and, today, a solid-state digital recorder. This medium, a relative of computer flash memory or a camera's SD card, allows for easier inspection, faster downloads and better survival chances in moisture and heat. Now standard equipment in all but the smallest planes, black boxes run on a stand-alone battery so that they can function during aircraft power problems [sources: Adler; Demerjian; Kavi; Paur].

Flight data transmission as a concept dates back decades. NASA already uses an internally developed system to transmit flight and voice data, and some commercial planes send technical data to maintenance centers. GPS-equipped planes ping nearby satellites on the hour, much as cell phones check in with local cell towers for call-routing purposes. Searchers have used this fact to get a rough fix on downed planes, particularly in the ocean where radar does not reach, but its usefulness is limited [sources: Adler; Demerjian; Kavi; Wald].

All of which suggests that the pieces are at least in place if authorities decide to pursue streaming data and/or remote storage. As it turns out, though, that's a pretty big "if."

If They're Not Black, Why Call Them Black Boxes?

We've all known someone with a nickname so old that no one can remember (or, at least, agree) where it came from. The black box is no different, but we've listed the two best guesses below.

A New Deal for FDRs?

Now that we've peeked inside the box, let's look at a few likely setups for storing data from cockpit voice recorders (CVRs) and flight data recorders (FDRs) on remote servers.

Using top-mounted antennas, high-flying planes could link with satellites, while lower-flying craft could send data to ground stations. The satellite bandwidth and coverage for such a system already exist (or soon will); the software and hardware infrastructure needed for switching among various cell towers and satellites is another matter [sources: Adler; Kavi].

As for delivery, airlines have plenty of options besides streaming. The system could save bandwidth by sending intermittent updates, transmitting in bursts or only updating parameters that showed significant change. Planes could still switch to a higher bit rate during takeoffs, landings and emergencies. In the latter case, such a system could provide early hints as to what went wrong and ping the plane's last position. Whatever the system, transmitting black box data will require a carefully orchestrated server and communications backbone able to dole out bandwidth amid an ever-shifting landscape of flight conditions, schedules and emergencies. Airlines would likely run their own servers [sources: Adler; Kavi].

In the short term, tech already on the market offers simpler ways to improve on black boxes. Consider the humble MP3 player. According to U.S. aircraft company LoPresti Speed Merchants, which plans to add the devices as FDRs on its Fury piston aircraft, the right software could enable such devices to record more than 500 hours of flight data [source: National Geographic].

The bottom line is that data storage may be cheaper than a SkyMall catalogue, but satellite bandwidth is not. According to one 2002 study, a U.S. airline with global stops would be on the hook for $300 million per year to transmit all of its flight data -- and that's assuming that future satellite transmission costs drop to half their current rates. Meanwhile, most airplane crashes occur during takeoffs or landings -- cases in which retrieving a black box involves spotting it, walking over and picking it up. Searchers generally recover them, even after high-impact crashes. As of 2011, the last American or European exception to this rule occurred in the planes vaporized during the 2001 World Trade Center attacks. Airlines, already operating within margins thinner than an airplane courtesy blanket, will likely balk at such a price tag when they perceive such a limited need [sources: Adler; Bachman].

In the end, barring an unlikely Federal Aviation Administration mandate, airlines must weigh such concerns against the value of saving future lives, improving efficiency by mining amassed flight data, and resolving billion-dollar lawsuits -- advantageously or not -- through backups of vital data [sources: Adler; Kavi; Wald].

Moving black box data off planes could open up other outside-the-box options. Computer programs might monitor aircraft telemetry, helping airlines spot problems that onboard instruments might miss and aiding aircraft in distress. Ground-based pilots might control planes remotely, like oversized drones, whether during emergencies or as part of a fleet of unmanned cargo haulers [source: Adler; Kavi].

Author's Note: Should black box data be stored in the cloud?

Cost is not the only factor barring the streaming of flight data -- or, at least, cockpit voice recorder data. Pilot unions have long balked at the idea of making their voice recordings (or proposed video recordings) available to anyone beyond accident investigators, and even they tend only to read the transcripts.

Here's a fun fact you might not know: CVRs equip an erase button, which pilots press after completing a safe landing (they don't work during takeoff or flight). True, encrypted streaming could preserve the same privacy and then allow for deletion after landing, but would pilots see it that way?

Potentially, new regulations -- perhaps spurred by public outrage over some fresh disaster -- could drive some sort of FAA mandate. But unless forced, it seems far less likely that black boxes will stream to the cloud, and more likely that outside technologies will join them in an augmenting or assisting role.

What Is a Ghost Flight?
Mile Bleh Club: Why Airline Food Doesn’t Taste Good
10,854 Cases of People on Planes Acting Like Humongous Jerks