The Future of Black Boxes 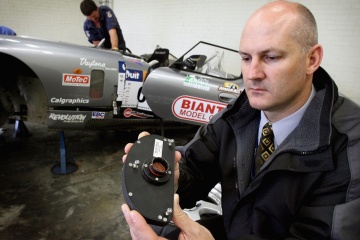 Not just for airplanes: The black box pictured here came from a race car that was involved in a crash in Australia in 2006.
Greg Burke-Pool/Getty Images

There are all sorts of potential improvements on the horizon for black box technology. Most obviously, current systems don't record any video of cockpit activity. For years, the National Transportation Safety Board has been trying in vain to implement video capabilities into black box systems, but many pilots steadfastly refuse to allow video, saying such systems violate their privacy and that current data capture is sufficient for accident investigators.

The NTSB continues to insist that there's no such thing as having too much information when investigating plane crashes. At present, video recording is still on hold.

But the technology is more than ready. Airbus, for example, installs a Vision 1000 system in all of its helicopters. The Vision 1000 camera is mounted behind the pilot's head, where it records video of the pilot's actions and the cockpit area, as well as the view beyond the windshield, at four frames per second. It weighs about a half a pound and needs only power and a GPS connection for activation.

Video isn't the only improvement that's found resistance from the status quo. Since 2002, some legislators have pushed for the Save Aviation and Flight Enhancement Act, which would require not one, but two flight recorders, including one that automatically ejects itself from the plane during an incident. Such self-ejecting recorders are easier to locate are less likely to suffer catastrophic damage. So far, though, the law has not passed Congress.

Black boxes aren't just for planes. They're now integrated into many types of vehicles. You may even have one in your car, though you don't know about it. About 90 percent of new cars have event data recorders (EDRs) that track the same kind of data as airplane black boxes. The EDR is ostensibly designed to maintain and monitor the car's safety system, but accident investigators can and do use EDR data to better understand wrecks ... and sometimes, to assign blame after an accident.

When it comes to black boxes mounted to airplanes, it's entirely possible that they'll go by the wayside. Instead of recording to a box, airplanes may soon simply stream all of their essential data directly to a ground-based station. These systems already exist. For example, AeroMechanical Services' FlyhtStream air-to-ground system sends flight data to a home base via satellite.

Such systems eliminate the desperate search for a box that may have been destroyed in a crash, and may be more dependable, too. For the moment, though, black boxes are still very much a necessity each and every day as thousands of planes take to the skies, flying millions of people all over the world.

I have a recurring nightmare about zooming through the skies in a doomed jet. Each time, the plane leaves the runway during takeoff and then violently accelerates straight up into the sky. I never get to the end of the dream. Perhaps that's a good thing. Happily, aircraft malfunctions are exceedingly rare – statistically speaking, your car is a whole lot more dangerous. But when planes do fall from the sky, it's a relief to have some idea why...otherwise, engineers and family members would be left agonizing, wondering why innocent people died in such an awful manner. I hope I'm never part of an accident scene where a black box is necessary. Unless, of course, it's just in my dreams.