Browse the article How Do Airplanes Get Inflight WiFi and Live TV? 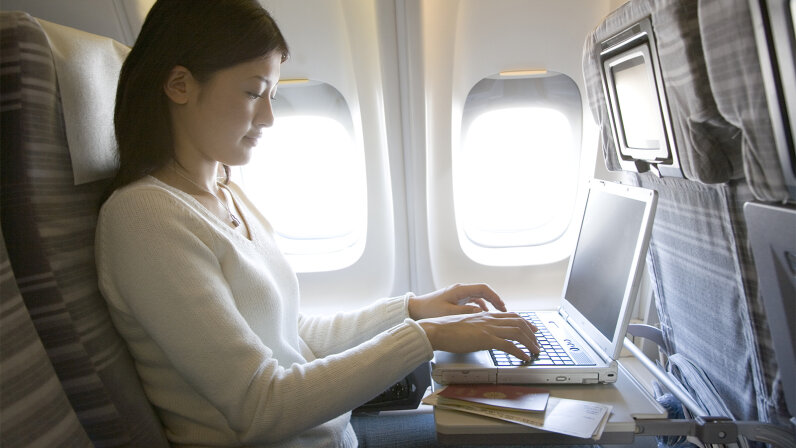 Keeping an airplane connected to the internet while it's moving at hundreds of miles per hour is a challenging technical feat due to rapid shifts in orientation, speed and direction. ICHIRO/Getty Images

There was a time, not that long ago, when airline passengers had to make do with watching in-flight movies on big screens in the cabin, reading paperback novels or simply gazing out the window at the clouds. They couldn't surf the internet or watch TV, because, well, they were on an airplane.

But that started to change in the late 2000s, when major airlines started offering wireless internet connections on flights. As this 2010 CBS News story notes, the Federal Communications Commission (FCC) helped make airline internet feasible by auctioning off blocks of the frequency spectrum previously used for seatback in-flight analog telephone service, which never really caught on because it was too expensive.

That, in turn, made it possible to use ground-based cellular towers to connect airline passengers to the internet, via several antenna fins attached to the plane, which detect the network and send and receive signals. As an e-book about in-flight connectivity from in-flight internet provider GoGo Business Aviation explains, keeping an airplane connected to the internet while it's moving at hundreds of miles per hour is a challenging technical feat, because the system also has to handle rapid shifts in orientation, speed and direction.

In addition to air-to-ground (ATG) transmission, an aircraft can also connect to the internet via an orbiting satellite. Satellite connections also enable airliners to provide in-flight TV programs as well. JetBlue began utilizing a satellite system to provide up to 24 TV channels to its passengers way back in 2000, according to this 2000 company press release.

American Airlines announced last September that it will provide free live TV as well as high-speed internet on many of its aircraft, with 12 channels — ranging from the major broadcast networks, CNN and TNT to the Disney Channel — available for streaming to customers' laptops, phones or tablets. From SFGate.com, here's a rundown of various airlines' inflight TV options.

Now That's Interesting
In an effort to reduce costs and make seats less bulky so more passengers can fit on planes, many airlines are eliminating the entertainment screens built into seat backs, The New York Times reported last year. The expectation is that passengers increasingly will bring along their own WiFi-enabled devices to watch streaming video.