Browse the article Drones May One Day Help Honeybees Pollinate 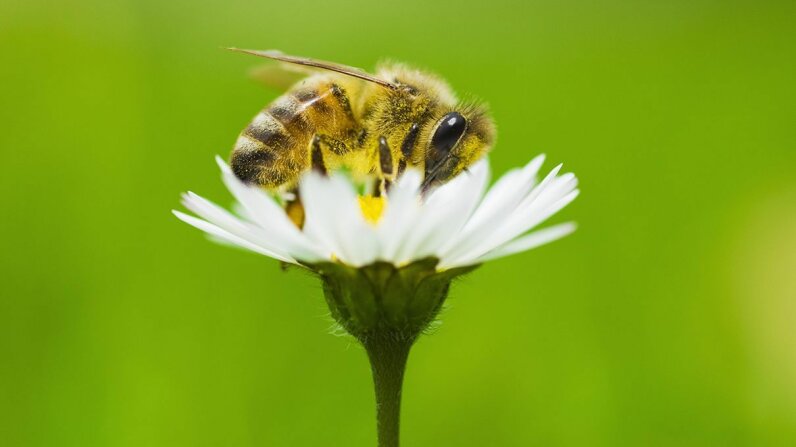 Honeybees could get a bit of help with future pollinating from robotic drones. Jason Hosking/Getty

Scientists have known for years that drones have the potential to revolutionize farming. Now, thanks to a group of scientists in Japan, the future of drones could be pollinating plants, which is critical to commercial crop growth.

Coated with horsehair and a special, sticky gel, the insect-sized drones buzz from plant to plant picking up and depositing pollen, just as honeybees would. Interestingly, the discovery of the gel, which uses the electrostatic attraction of oppositely charged ions to create a gripping chemical bond, happened by accident 10 years ago.

Chemist Eijiro Miyako, who works at Japan's Advanced Industrial Science and Technology (AIST) Nanomaterial Research Institute, was trying to concoct a liquid that could conduct electricity. The research was a bust. All Miyako discovered was a very sticky gel. He placed it in a cabinet where it sat for a decade.

But as the gel collected dust, Miyako grew increasingly concerned about the decline of the honeybee population. Honeybees are prodigious pollinators responsible for pollinating 90 commercially grown crops. Since 2003, beekeepers in the United States and Europe have reported a loss of 30 percent or more of their hives. In fact, the number of honeybee colonies in the United States has declined from 6 million in 1947 to just 2.5 million today.

Miyako began to explore ways to use his ionic gel to pollinate plants. He experimented by putting a dab on the back of ants and then left the insects to scurry about in a box of tulips. He later checked them to see if the gel collected any pollen. It did. He then tried it with houseflies. The gel worked on them too.

Next, Miyako found a tiny drone that could fly across a field of flowers just like a honeybee. He coated horsehair with the ionic gel, and stuck it to the drone. The horsehair mimicked the bee's fuzzy body, creating a wide surface area for pollen to adhere.

On the first test flight over a field of lilies, the drone was a success. The gel picked up and transferred pollen from flower to flower, while drones without the gel did not. But Miyako isn't the only one to create a drone for pollination.

Anna Haldewang, an industrial design major at Savannah College of Art and Design in Georgia, also developed a drone pollinator she dubbed Plan Bee for a class project. Instead of using an ionic gel, Haldewang's Plan Bee drone sucks in a flower's pollen through tiny holes while hovering above it. The pollen is stored in the drone's body cavity, and then released later in another flower for cross-pollination.

Neither of the drones have been used commercially, but both Miyako and Haldewang hope the drones will be marketable in the next few years and help reduce the stress and demand on the natural bee population.

Now That's Interesting
When Eijiro Miyako put the ionic gel on houseflies, the substance camouflaged the insect, helping it escape from predators.