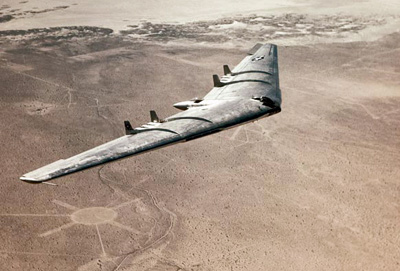 The Northrop YB-49 flying wing was a jet-powered bomber prototype designed back in the 1940s -- even though its unique design still looks modern. See more pictures of flight.
Peter M. Bowers Collection

The only certainty in life is that things change. This has especially been true of politics. The world barely had time to digest the fact that Russia and the former member states of the Soviet Union no longer constituted the threat they once represented when trouble began to break out in smaller countries on a smaller scale.

The first flash point was in Bosnia, where the first-ever NATO combat missions attempted to forcibly solve the problems of ethnic strife. On one of these missions, in February 1994, United States Air Force F-16s shot down four Bosnian Super Galeb attack planes. There was also a sense of historical significance during Operation Deliberate Force, when on June 30, 1995, the German Luftwaffe flew its first combat mission in 49 years as Panavia Tornados made reconnaissance flights from a base in Italy.

This was low-level war, with no threat of atomic, chemical, or biological weapons evident. But it was dangerous nonetheless and required the full application of all the weapons of modern warfare, including space-based systems, stealth aircraft, and precision-guided munitions.

Iraq continued to be a hot spot, refusing to permit U.N. weapons inspectors access and routinely firing on U.N. aircraft patrolling "no-fly" zones. In one instance in 1996, when Iraqi military movements seemed particularly threatening, two Boeing B-52s made a dramatic around-the-world flight in 47 hours, dropping 54 bombs on a target range near the Iraqi border en route. The message was understood, and the Iraqi military stopped its menacing actions.

­The year 2003 was the centennial anniversary of powered flight, but even as the aviation world approached and passed this landmark, there were records to be broken. The adventuresome continued to fly higher, faster, and farther than ever before.

In 1994, Ron Bower made the fastest global circumnavigation in a helicopter, flying a Bell Long Ranger and completing the task in 24 days, 4 hours, 6 minutes. A year later, a Boeing 777 made another record flight around the world, averaging 533 miles per hour and setting one great circle distance record of 12,455 miles.

In 2005, billionaire adventurer Steve Fossett completed the first ever nonstop, unrefueled solo flight around the world in the Virgin Atlantic GlobalFlyer. The next year, he extended GlobalFlyer's unprecedented range by taking her on the longest nonstop flight in history, covering some 26,000 miles. In terms of raw speed, NASA's unmanned X-43A hypersonic scramjet set a new world record for an air-breathing jet engine in 2004 by reaching the unbelievable speed of 7,000 mph.