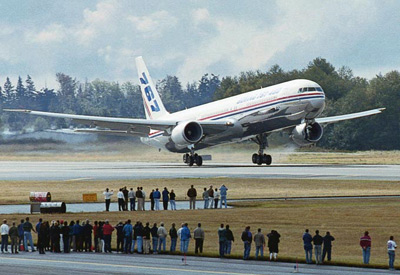 The Boeing 767 is another widely-used twin-jet passenger airliner in the Boeing fleet.
The Boeing Collection

The turn of the century was marked by an increase in international cooperation, w­ith, for exam­ple, the launching of the Echo-Star direct TV satellite by a Chinese Long March rocket booster. In 2003, the European Space Agency launched its SMART-1 spacecraft toward the moon, and in 2007, its Rosetta spacecraft passed Mars on its way to a distant comet. Not to be left out, Japan that same year sent an unmanned spacecraft to the moon.

There were dozens of other space successes including one that was technically brilliant but economically unsound: The Iridium company put up 66 satellites for a worldwide communication system, only to find that the ordinary cell phone had proliferated to such an extent that the system was virtually without value.

The wave of mergers went on, with Northrop acquiring Grumman to become Northrop Grumman on March 29,1994. Grumman would close its aircraft manufacturing capability as Northrop Grumman embarked in a variety of new competitive arenas. Then Boeing acquired McDonnell Douglas. This time there was no hyphenated name. As McDonnell Douglas signs came down at St. Louis, Long Beach, and elsewhere, Boeing signs went up. One reason for the merger was that the McDonnell Douglas entry in the Joint Strike Fighter competition had lost out, essentially removing that venerable firm from the fighter business. Boeing and Lockheed Martin competed for the JSF $200 billion contract, the largest in history, and Lockheed Martin won with a highly capable aircraft that bore a strong resemblance to the F-22.

Merger mania also extended to the airlines when two of Europe's largest carriers, KLM and Air France, officially merged in 2004 to form Air France-KLM. In the U.S., merger talks were widespread and ongoing as airlines struggled to find ways to stay financially aloft.

For the airplane fan, the problems of war and space mattered little so long as new and beautiful airplanes were developed. These included the Boeing 777, Beriev Be 32K, Airbus A319, Tupolev Tu-214, Cirrus SR-20, Learjet 45, EMBRARER 145, Lockheed Martin C-130J, and Raytheon Beech T-6A Texan II.

Perhaps even more significant than the aircraft themselves were innovative new categories of aircraft that debuted during this period.

The unveiling of the FAA's landmark Sport Pilot rule in 2004 opened floodgates to a whole new generation of light sport aircraft of all shapes and persuasions, the likes of which had not been seen since the Golden Age of aviation.

A new category of "superjumbojet" was introduced with the massive 555-passenger Airbus A380, which made its first passenger flight late in 2007. A new concept in private jet aircraft emerged in 2006 with the first of the "Very Light Jets" (VLJ). Such miniature jet aircraft as the Cessna Citation Mustang and the Eclipse 500 suddenly made the world of high-altitude, high-speed jet flight affordable to a much wider range of customers.

Finally, a truly revolutionary new concept came about with the introduction of the Scaled Composites SpaceShipOne, which in 2004 became the first privately built and funded rocketship to carry a human into space. By accomplishing this feat. it claimed for its team the $10-million Ansari X-Prize, but more important, it completed the first step toward making routine travel into space by ordinary citizens a reality.