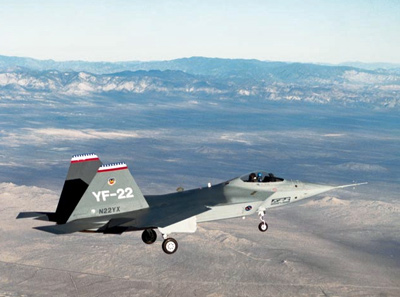 The Lockheed-Martin F-22 Raptor was among the first of the fifth generation of fighter planes.
Warren M. Bodie Collection

Military aviation was not excluded from the conceptual renaissance. The first of the so-called "fifth generation" fighters, led by the Lockheed Martin F-22 Raptor and F-35 Lightning II Joint Strike Fighter, made their presence known in a big way. Designers combined innovations such as thrust vectoring, stealth technology, and advanced avionics and weapons systems to make these aircraft the most potent air weapons ever known to man.

Significantly, some of the military's new aircraft came without cockpits. With the advancement of computer technology and the ongoing goal of keeping pilots out of harm's way, futuristic-looking unmanned aircraft played an increasingly important role in military operations. These aircraft included the General Atomics MQ-1 Predator; the Northrop Grumman RQ-4 Global Hawk unmanned aerial vehicle, and X-47B Joint Unmanned Combat Air Systems aircraft. The X-47B was the world's first unmanned surveillance attack aircraft capable of operating from both land bases and aircraft carriers.

The world changed forever on September 11, 2001, when Arab terrorists used U. S. airliners to attack the World Trade Center and the Pentagon. The United States reacted, gathering a coalition and using pure air power in an attempt to destroy strongholds of the Al Qaeda and overthrow the Taliban regime. This led - directly or indirectly - to the invasion, defeat, and occupation of Iraq by overwhelmingly superior U.S. military forces.

But contrary to the "Mission Accomplished" banner hanging behind President George W. Bush after he landed on the USS Abraham Lincoln on May 1, 2003, the mission was far from accomplished. The war on terrorism promises to be a long one, new tactics will be brought to bear, and there will be advances in both air and space beyond our imagination.

Sadly, tragedy struck again on February 1, 2003, with the loss of the Space Shuttle Columbia and its seven crew members. The accident pointed to organizational problems at NASA and seemed to place the future of both the Space Shuttle Program and the International Space Station in jeopardy. Concern was expressed as to whether the scientific return from the two programs justified the risk involved. There was pressure to evaluate the entire piloted space program to determine how to proceed. Some said that unpiloted spacecraft could perform substantially all of the current Space Shuttle and International Space Station missions, while others maintained that it was essential from an emotional and spiritual point of view to continue with piloted space flight.

In the end, however, it appears that both opposing views might actually have prevailed. On the one hand, nations worldwide have successfully sent increasing numbers of unmanned space probes into outer space to explore our solar system. But during the same period following the Columbia tragedy, Space Shuttle missions to the International Space Station, as well as other manned missions, have continued. Even China joined the act in 2003 by becoming only the third nation ever to send a man into space. Even more telling, NASA announced in 2006 a long-term plan not only to once again send humans to the moon, but also to create a permanent manned base there!

Regardless of how events unfold, one thing seems certain: The future of aviation and space exploration remains bright and limitless, but as long as man has the capacity to reason, these pursuits will -- as they always have -- continue to evolve with the times.

Read about the very beginnings of aviation in The Dawn of Flight.