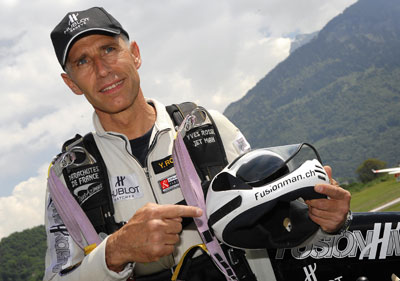 How did this man manage to fly through the air at speeds of 190 mph?
Fabrice Coffrini/AFP/Getty Images

When the Roman poet Ovid wrote his collection of mythical poems, "Metamorphoses," he included among it one of the most famous stories in history: The tale of Daedalus and his precocious son, Icarus.

­In the story, Daedalu­­s, a celebrated architect and in­ventor, is trying to escape the island of Crete with his son, where they've been imprisoned by King Minos for helping the hero Theseus slay the Minotaur, a half-bull, half-man creature locked up in a large labyrinth. Minos, unfortunately, controls the seas surrounding Crete, so Daedalus realizes the only way off the island is through the air. He fashions himself and Icarus a pair of feathered wings, which are glued on with wax. He also makes sure to warn Icarus not to fly too close to the sun, since the sun's heat would melt the wax, or too close to the sea, since the water below would dampen the wings and weigh him down.

Icarus, of course, gets too excited and proud of his flying, and does exactly what his father tells him not to do -- he flies too close to the sun, his wings melt and he plunges into the sea.

The age of the tale, along with the emphasis on human flight, illustrates how important the concept of flying is to us. The most exciting dreams we have are the ones in which we're flying, and our love of roller coasters and flying superheroes points toward our desire to move freely through the air. But we know it's just a simple daydream, right? Is it possible for winged flight, without the help of an airplane?

A Swiss citizen who calls himself FusionMan has become a modern-day Daedalus -- not an Icarus -- by becoming the world's first person to fly with fitted wings attached to his back, reaching speeds as high as 190 mph (306 kph) in the air. But how did he do it? He certainly didn't use wax, right? To learn how FusionMan flew, read the next page. 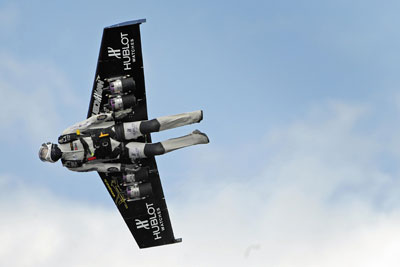