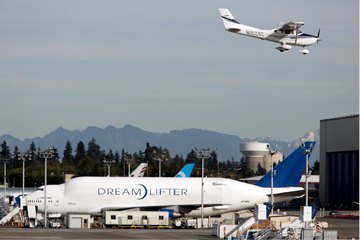 The Boeing 747 Dreamlifter hangs out at Paine Field Airport in Washington. See that aircraft flying above? That should give you an idea of just how massive a Dreamlifter is. Now imagine that giant landing unexpectedly on a modest runway.
© Jason Redmond/Reuters/Corbis

"Uh, ladies and gentlemen, this is the flight deck welcoming you into Wichita. On behalf of the crew, we'd like to thank you for choosing Airborne Airways, where your destination is always up in the air.

"You may now feel free to power up your electronic devices. Um ... in fact, if, uh, any of you have GPS, we'd like you to join us in a little game. A free bag of peanuts for the first passenger to tell us, uh, which airport we're at ... "

It might sound ridiculous, particularly in the age of GPS satellites, but airplanes do occasionally land at the wrong airport. When they do, the consequences can include not only red-faced pilots, but also inconvenienced passengers, endangered planes and damaged airfields.

In November 2013, a Boeing 747 Dreamlifter touched down at Col. James Jabara Airport in Wichita, Kan. Unfortunately for the Atlas Air crew and for Boeing's production schedule, it was supposed to land at McConnell Air Force Base about 10 miles (16 kilometers) to the southwest, not at a small, general aviation field more accustomed to private planes and small business jets [source: Ostrower].

The mix-up caused no immediate harm, but it put the plane in a bit of a pickle. A Dreamlifter is a bloated tick of an aircraft -- a massive 747-400 modified with 65,000 cubic feet (1,840 cubic meters) of cargo space to haul 787 Dreamliner parts from global suppliers to assembly line locations. It has a maximum takeoff weight of 803,000 pounds (364,000 kilograms). With its 211.5-foot (64.4-meter) wingspan, it spreads more than double the width of the runway at Col. Jabara. Several newspapers reported concerns that the 6,100-foot (1,860-meter) runway was too short for the massive plane to take off from [sources: Boeing; KWCH; Mutzabaugh].

Ultimately, the plane shed all unnecessary fuel and took off using only 4,500 feet (1,372 meters) of runway. The city shut down nearby roads as a precaution against jet blast, but rubberneckers still managed to cause a few fender-benders -- the only damage caused by the incident, aside from a few broken runway lights and some wounded pride [sources: City of Wichita; KWCH; LeBeau].

Getting the runway wrong doesn't always end so well, however. In 2006, a Continental Boeing 757 landed on part of a Newark Liberty International Airport taxiway, the slow-traffic path airplanes take to and from gates. No one was injured, and no damage to the plane was reported. Also in 2006, a Comair regional jet in Lexington, Ky., crashed and burst into flames after running out of room on the wrong runway. Forty-nine people died, with only the first officer surviving [sources: Alfano, Demerjian].

In the last decade, at least half a dozen such incidents have occurred in the United States alone, thanks to weather, flight crew errors or blunders by air traffic control. To understand why, we need to look at how pilots land and at how airports are laid out.

The Boeing Dreamlifter example illustrates one of the most common causes of airport screwups: namely, two or more airfields lying in close proximity and sharing similar runway alignments. Dozens of airstrips lie scattered across the metropolitan area of Wichita -- the self-proclaimed "Air Capital of the World," thanks to its strong aircraft industry presence. The region surrounding McConnell Air Force Base alone boasts at least five [source: McMillin]. Consequently, when the Atlas Air pilot got his position wrong, he got it even more wrong than he realized: He thought the plane had landed at Beech Field, not Col. Jabara [sources: Jamieson and Chuck; LeBeau].

The likelihood of mistaken landings varies according to the landing system used by the pilot. Under an instrument landing system (ILS), the pilot or aircraft autoflight system tracks a set of crosshair signals all the way to the runway and therefore has little chance of wandering off the beam, provided that flight plan info is inputted correctly. On the other hand, pilots using a visual approach -- in which the crew recognizes the airport by sight and plots the most practical course and pattern to the runway -- have more rope with which to hang themselves. Both types of approach are common.

Between these two lie a number of "non-precision" instrument patterns, including the area navigation (RNAV) system that the Dreamlifter used. RNAV relies on inertial guidance and/or external course-plotting systems -- such as navigation satellites (GPS) and older VOR (very high frequency omnidirectional range) and DME (distance measuring equipment) signals -- to reach the field's vicinity. After that, it's up to the flight crew to sight the strip and land via a visual approach. This, too, leaves room for mistakes, which is why regulations require crews on visual approach to run through the checklist that confirms their location [source: Smith].

We won't know the full story on the Dreamlifter mix-up until the U.S. National Transportation Safety Board (NTSB) completes its investigation, but we do know that, in Wichita's case, the confusion has occurred before, especially in bad weather. In fact, one former Boeing employee told the Wichita Eagle that the company used to brief pilots about the problem, although he added that most pilots twigged to the mistake before landing [source: Plumlee and McMillin].

Of course, Wichita isn't the only city where mistaken landings happen. It's not even the only one where they've happened multiple times.

Following the 2006 Comair incident, federal regulators and safety experts called for additional pilot training focused on runway confirmation for takeoff and landing. Along these same lines, Honeywell International Inc. and Airbus have developed systems that alert crews when they have strayed from the assigned path, although the industry has yet to adopt them widely [sources: Ostrower; Smith].

The Aviation Hall of Shame

The Boeing Dreamlifter incident was only one example of landing at the wrong airfield. Although rare, it happens more often than you might think.

On Jan. 12, 2014, a Southwest Airlines flight took off from Chicago's Midway International Airport and landed at Taney County's M. Graham Clark Downtown Airport in Missouri. The plane was supposed to touch down at Branson Airport in southwest Missouri, a facility located 8.6 miles (13.8 kilometers) away [source: Martin]. The National Transportation Safety Board opened an investigation the following day. Passengers and crew were all fine, even with the short runway, thanks to some heavy braking.

The previous September, a Continental Connection flight bound for Lake Charles Regional Airport in Louisiana landed instead at nearby Southland Field, a strip more accustomed to handling crop dusters than commercial flights. Similar incidents occurred at least twice there in the 1990s, including another Continental Express flight in 1996. That crew attributed the mistake to Southland Field's similar compass heading and recently installed bright lights, and added that the strip they landed on bore the same number as their assigned Lake Charles runway [sources: Associated Press; Mutzabaugh; Sulphur Daily News].

Such incidents occur all around the globe. In April 2009, a TAAG Angola Airlines flight bound for Zambia's Lusaka International Airport landed instead at an airfield used by the Zambian air force. The pilot recognized his mistake but landed anyway to avoid frightening the passengers with a sudden pull-up [source: Demerjian].

But you don't have to work for one of the least-safe airlines in the world to commit such a gaffe. In April 2009, a Turkish Airlines jet headed for Tbilisi, Georgia, instead put in at a military base 10 miles (16 kilometers) away [source: Demerjian].

Indeed, 10 miles seems to be a magic number in these cases. Col. Jabara Airport is situated roughly that distance from McConnell Air Force Base; MacDill lies about 5 miles (8 kilometers) off the end of Peter O. Knight's runway; Lake Charles Regional is located about 9 miles (14.5 kilometers) east of Southland [sources: Mutzabaugh; Smith].

There are exceptions, of course. Back in November 2007, the plane carrying then-presidential candidate Barack Obama landed in Des Moines, Iowa -- 100 miles (161 kilometers) from its scheduled stop in Cedar Rapids [source: Associated Press]. Maybe the pilot thought he'd like to be a few months early for the Iowa caucuses.

Who Controls the Controllers?

In 1995, a Frankfurt-bound DC-10 landed in Brussels after air traffic controllers received and conveyed the wrong flight information. Given the complexities of approaches in packed European airspace, the pilots did not suspect they were being led astray until they had nearly arrived in the Belgian capital. By then, they were low enough on fuel that they opted to land despite being 189 miles (304 kilometers) and one country from their intended destination [sources: De Wolf and Learmount; Smith].

Author's Note: How can a plane land at the wrong airport?

I sometimes think that we are surprised by stories like these only because we vastly overestimate the people and machines with which we entrust out lives. Each year, roughly 4,000 American patients are left with surgical souvenirs on the wrong side of their sutures -- usually sponges, but occasionally clamps, scalpels or scissors [source: O'Connor]. Are surgical staffs incompetent? Far from it; but, like pilots, they perform a complex and occasionally chaotic task, often while fatigued.

While it might be easier in the short term to imagine ourselves safe in the hands of experts, maybe from time to time we should just face the uncomfortable fact that we are rolling the dice. And why not? The odds are generally in our favor, even if today's surgeon or pilot is yesterday's college roommate -- you know, the one who drank a lot and never studied ...

How Do Airline Pilots Know Turbulence Is Coming Up?
Supersonic Travel Could Be Coming Back
How does an afterburner work?