by Rachel Pendergrass Mar 8, 2016
The Airlander aircraft hangs out in a giant shed on Feb. 28, 2014, in Cardington, England. Although slow moving compared to conventional aircraft, the Airlander is able to carry large payloads. Oli Scarff/Getty Images

Steampunk enthusiasts rejoice! In the very near future, you could catch a modern-day dirigible bound for faraway destinations. Introducing the Airlander 10, a 302-foot (92-meter) long helium-powered aircraft that may or may not resemble a giant flying rump if you look at it from, er, behind.

The hybrid aircraft was developed as a surveillance vehicle for the U.S. Army but abandoned in 2012. That's when British company Hybrid Air Vehicles, who was a contractor for the original project, stepped in to convert the ship for commercial use. It celebrated its first flight in August 2012 and should have its first commercial test flight in just a few weeks. The company plans to use it for leisure and business flights, coast guard duties, military and civil surveillance, filming and academic research.

Hybrid Air Vehicles is also teaming up with its Swedish partners, OceanSky to deliver wind turbines sustainably. Sustainable how? Did we mention the current largest aircraft in the world can land on water and doesn't require an airport?

Chris Daniels, the head of partnerships and communications for Hybrid Air Vehicles, says via email that he's super excited for the first passenger version of the Airlander 10. He imagines it "floating serenely across the planet's top tourist spots seeing everything from a unique perspective."

Airlander 10 is made up of a large hull filled with 1.34 million cubic feet (38,000 cubic meters) of helium (enough to fill 15 Olympic-sized swimming pools), a mission module that contains the cockpit and payload bay, a fuel module and four engines, which can rotate. Most of its lift is produced by being lighter than air (aerostatically), so the engines are mostly there for steering, although they can rotate to provide additional thrust up or down. This allows the airship to hover, land on any surface, and take off and land vertically. It's also so fuel-efficient that it can stay airborne for up to five days if manned, and over two weeks if unmanned.

Those worried about the next great Hindenburg disaster can relax.

"It is one of the safest aircraft around at present. The hull has 15 entirely separate chambers. We have four engines, yet can fly on one and glide easily to Earth on none," says Daniels. "We can alter the trim of the aircraft in many ways and make it more or less buoyant as the situation dictates. Helium is inert and smothers flame, and as one of our shareholders states, we're the biggest fire extinguisher around!"

There is still a long way to go before the Airlander 10 is ready for commercial production. The company still has a 200-hour flight test program to finish, followed by trials, demonstrations and airshows. The hope is to start building a second version of the Airlander in 2017. Even then, the journey isn't over.

"Then there's the challenge of putting all this knowledge together to create a production line of Airlanders — we'd like to be rolling out at least six a year, and maybe double that number" says Daniels.

Now That's Cool
Despite being the second most abundant element in the universe, helium is nonrenewable, and some scientists are concerned that we're using up our supply faster than we can replace it. The United States, however, has been stockpiling helium since the 1920s under the Federal Helium Program. 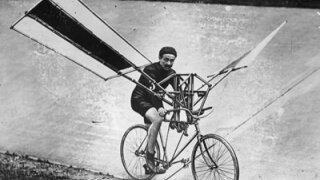