What may have caused Cory Lidles plane crash? 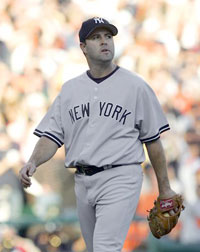 When a small plane crashed into the 42nd floor of a New York City high-rise on Wednesday, October 11, a few moments of sheer terror passed before the truth of the situation came out. It wasn't terrorism, just a tragic accident, and it happened to involve a starting pitcher for the New York Yankees. Cory Lidle, who had been traded to the Yankees in 2006, and Tyler Stanger, his flight instructor, died when Lidle's Cirrus SR20 hit the building. We were stunned: How could this happen? And in New York?

The fact is, small planes are flying around at low altitude above New York City all the time. Two main sightseeing routes, one above the Hudson River and another above the East River, let the pilots of small planes take a tour over the city at about 1,100 feet, where they stay out of the way of the massive amounts of commercial traffic going in and out of La Guardia, JFK and other major airports in the vicinity. These routes can be somewhat challenging, and the one over the East River is considered the more difficult of the two since it's narrower, just a half-mile wide in some places, and more closely lined with skyscrapers. Lidle's plane was flying that route. Air traffic control can see these small planes on its radar as long as they're equipped with the right transponder, but unless one of the planes diverts from its path or sends out a distress signal, air-traffic controllers generally didn't talk to them. Those routes right above the city were pretty much unregulated and relied on the skill of the pilots to look out for and appropriately react to any dangers that come up, including bad weather and increased traffic. But two days after Lidle's crash, the FAA banned small, fixed-wing planes from flying along the East River unless the pilot is in contact with air traffic control.

While early reports had Lidle's plane sending out a fuel-related distress call, later investigation proved that false. There was no call. And diverting from the route over the East River at just 1,100 feet means being amongst the skyscrapers of New York City within seconds, so there's not much time for talking when a pilot loses his way on the narrow path. Radar records indicate that Lidle's plane actually never made it above 800 feet between the time it left Teterboro Regional Airport in New Jersey and the time it hit the building. Reports early Friday morning say the plane was traveling at just 700 feet when it hit the building, which was positioned just before the point where Lidle's plane would've had to turn around to avoid flying into La Guardia's restricted airspace. While it's too early to know why the disaster happened, experts do have some ideas of what might have caused the crash.

First, there are far more accidents involving small, private planes than commercial jets. It's not an understatement to say these crashes happen all the time. National Transportation Safety Board (NTSB) data reports an average of 1,200 accidents per year involving personal aviators, about 275 of them fatal. Why so many? There are lots of reasons, according to experienced pilots. According to Salon.com pilot/writer Patrick Smith, commercial aviation and general aviation are completely different worlds. The rules surrounding commercial aviation are much, much stricter than those related to personal flying, from pilot training to equipment checks to safety measures. When a general-aviation plane goes down, you're probably looking at one of two broad categories of causes: pilot error or equipment malfunction that renders a plane uncontrollable. In a small plane, the latter is the less likely cause. More often, an equipment problem that is not catastrophic becomes catastrophic when an inexperienced pilot doesn't know how to handle it. That's reason number one in general aviation accidents: lack of piloting experience.

Pilots with fewer than 300 hours of flight time under their belts are the most likely group to make fatal errors. Lidle had fewer than 100 hours of flight time, and fewer than 50 hours of solo time. Compared to someone with thousands of hours of experience flying a plane, who has come across a wide variety of non-catastrophic blips that occur when you're in the air -- and there are an endless supply -- an inexperienced pilot is far more likely to turn a non-catastrophic occurrence into a fatal crash. It's all about judgement and reaction to, say, suddenly blinding cloud cover, increased traffic or an equipment problem. Most of these things are manageable for someone who has enough experience in the air.

The day of Lidle's crash, the skies were cloudy. Lidle (if indeed it was Lidle at the controls) was flying under Visual Flight Rules (VFR) as opposed to Instrument Flight Rules (IFR), which means the pilot is entirely responsible for spotting and avoiding obstacles. Lidle wasn't certified yet for IFR. On a cloudy day, VFR can be challenging, to say the least, considering it's pretty hard to see anything when you're in a cloud. If the plane were in cloud cover and the pilot became disoriented, he might lose his bearings and break from the narrow band of airspace over the East River. It's then a few seconds to the nearest skyscraper.

In Salon.com's "Ask the pilot," Smith sets forth a couple of possible scenarios. Lidle may have gotten caught in cloud cover and lost his orientation, which according to Smith is pretty common for an inexperienced pilot. He lost his bearings and headed for a break in the mist, only to see a building directly ahead and too close to avoid. Another possibility is a loss of power or engine failure that caused Lidle to immediately head to La Guardia, the nearest landing point, but make another classic rookie mistake when he realized he was amongst obstacles: pulling up too sharply and inducing a stall (the cessation of the lift force that keeps airplanes aloft) that he couldn't pull out of because he was surrounded by buildings. If Lidle panicked at the controls, he could've ended up with a plane that was not only in a stall but was also completely uncontrollable.

As of Friday morning, investigators have recovered the memory chip from Lidle's plane, but Cessna officials warn that it could be worthless. These memory chips aren't like black boxes -- a fiery crash can destroy them. Investigators still don't know whether Lidle or Stanger was flying the plane.

For more information on private aviation, air safety and related topics, check out the following links:

Will the FAA Ever Regulate Legroom on Commercial Planes?
How Aerobatics Works
Bleriot XI