What measures are in place to safeguard against mid-air collisions? 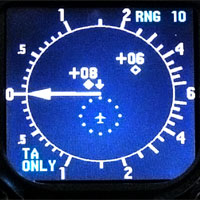 On Friday, September 29, a Gol Airlines Boeing 737 disappeared from air traffic control radar screens. A search ensued, and Brazilian officials located wreckage of the passenger jet in the Amazon rainforest. One-hundred and fifty-five people died in the crash. That same day, authorities learned that a small, private plane had made a successful emergency landing in the same general vicinity after sustaining damage in flight. An investigation determined that the incidents were connected -- the result of a mid-air collision.

There are many reasons why the accident shouldn't have happened. Since the late 1950s, following several tragic mid-air collisions including one over the Grand Canyon that occurred after the pilots of two different planes changed their course to give their passengers a better view of the chasm, air traffic control (ATC) procedures have gotten increasingly strict and sophisticated. And since the late 1970s, radar-based collision-detection units called Traffic Collision Warning and Avoidance Systems, or TCAS, have been mandatory on all aircraft licensed to carry 19 people or more. These two systems combined -- air traffic control and TCAS -- have nearly eliminated mid-air collision from the list of accident causes.

There are numerous ATC-based measures in place to decrease the possibility of a mid-air collision. For most controlled airspaces, which are airspaces covered by an air traffic control tower, aircraft have to get an ATC clearance for each stage of their flight from take-off to landing. This clearance provides pilots with a precise route, altitude and the maximum distance they can fly before getting their next clearance. This clearance information is recalculated at each stage using time, distance and altitude data for each plane in the area, which comes from ground-based radar, radio transmissions by pilots or GPS systems that track planes. This process lets ATC operators control the separation of aircraft -- the distance between any two planes in their airspace at any given time. Minimum altitudinal separation is 1,000 feet (300 meters).

In uncontrolled airspace, when there is no ATC tower to control the movements of aircraft, planes use international guidelines to maintain separation. These guidelines include minimum altitudes at which a plane can be sure to avoid ground obstacles and direction-based rules for cruising altitudes. For instance, planes on a westward course should always be at an even-numbered altitude (i.e. 30,000 feet), and east-bound planes should always be at an odd-numbered altitude (i.e. 31,000 feet).

And if two planes still end up on a collision course, the TCAS units installed on the aircraft should alert the pilots to take evasive action as soon as two planes get close enough to each other for a collision to become predictable. TCAS units are electronic devices that send out constant radio signals in all directions on the 1030 MHz band. This signal is asking any plane for its location information. Each plane in a 40-mile (60-km) radius that has a TCAS transponder picks up on the signal and responds with its exact position. This all happens automatically -- there is nothing manual involved. Each time the sending TCAS unit receives a response indicating the location of another plane, it uses the information to build a 3-D representation of the airspace around the sending plane, indicating the relative positions of any plane in a 40-mile radius. When a plane gets too close for comfort, the TCAS unit sounds an alarm in the cockpit. In TCAS I (first generation) units, this alarm was simply an alert that said, "traffic, traffic," to tell the pilot there was dangerous traffic in the area that he or she needed to take action to correct. TCAS II devices go one step further: The alarm doesn't just warn the pilot of dangerous traffic, but it also tells the pilot what action to take to avoid a collision, such as "descend, descend." The TCAS units in each aircraft on a collision course coordinate their alerts via radio signals, so that one will tell its pilot to descend, and the other will tell its pilot to climb. The next generation of TCAS will include X-axis (right/left) instructions in its alerts in addition to the Y-axis (up/down) instructions to further increase the separation between the aircraft.

After a fatal mid-air collision over Germany in 2002 that resulted from one pilot obeying the TCAS commands and the other pilot obeying air-traffic control commands (both planes descended and crashed into each other), international guidelines established an absolute hierarchy of which commands to obey in the case of conflicting orders. TCAS commands trump air-traffic control commands (and Ground Proximity Warning System commands trump TCAS commands). Since TCAS units coordinate their commands with the other plane involved in the danger, if both pilots do what the TCAS says, they should avoid a collision.

In the 10 years before the fatal accident over the Brazil that downed the Gol plane, there were only two mid-air collisions involving passenger jets that resulted in loss of life, although several near misses have been documented. One report involves a 737 and a private plane that came within 100 feet (30 meters) of each other over Britain in 1999. Some sources say an air traffic controller prevented the disaster by ordering one pilot to descend, while others report that the TCAS in the smaller plane prompted that plane's pilot to descend and avoid the crash.

For more information on mid-air collisions, TCAS and related topics, check out the following links:

How Do Airline Pilots Know Turbulence Is Coming Up?
Supersonic Travel Could Be Coming Back
How does an afterburner work?