What went wrong with the MD-80 aircraft? 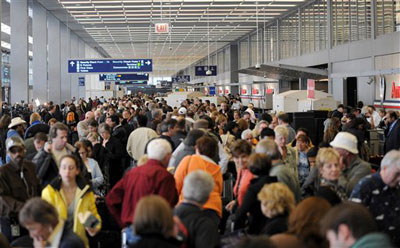 On April 8, 9 and 10, 2008, more than 100,000 people were stranded in airports throughout the United States, including Chicago-O'Hare Airport. For images of aircraft, see our airplane image gallery.
AP Photo/Paul Beaty

"Shoot me now," requested one traveler stuck at Chicago-O'Hare Airport in April 2008 [source: CBC]. This passenger, like an estimated 100,000 others spread across the United States, found herself stranded because of flights canceled by American Airlines on April 8, 9 and 10, 2008 [source: Los Angeles Times].

­American Airlines (AA) grounded its entire fleet of Boeing-manufactured MD-80 aircraft, a total of around 300 planes [source: Aviation]. As a result, as many as 2,500 flights were canceled by the airline [source: CNN]. As the number of stranded passengers began to grow, AA scrambled to make other accommodations for them. Some were packed aboard other air carriers' flights at American's expense. Others were reimbursed for the lodging they'd paid for after being stuck at the airport. Still others were given meals or vouchers for food [source: AA]. At one point at O'Hare Airport, AA ticket agents served waiting passengers juice and cookies [source: NPR].

Business analysts Thomson Financial estimated that the total loss of revenue from the canceled flights could reach $300 million [source: CNN]. From April 8 to April 9, 2008, shares in American's parent company, AMR, dropped 10 percent in value [source: AP] (although they curiously rose 5 percent on April 10 [source: Forbes]).Taking into consideration angry customers, bad publicity, lost revenue and expended capital, it would be fair to say the cancellations were a financial bloodletting for the airline.

The mass cancellations came amid a cascade of other headaches for the airline industry. With the U.S. economy weakening, airlines attracted fewer passengers [source: IHT]. The problematic opening of the Terminal 5 at London's Heathrow Airport impacted international flights [source: BBC]. Prices for aircraft fuel were on the rise [source: New York Times]. And in the U.S. Congress, elected officials investigated accusations that the Federal Aviation Administration and the airlines had too close of a relationship [source: USA Today].

But what exactly caused more than 100,000 passengers to become stranded at airports around the United States and elsewhere in early April 2008? Find out what's wrong with the MD-80 on the next page. 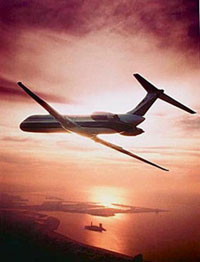 As it turns out, the American Airlines cancellations that began on April 8, 2008, are directly related to a March 2008 incident with an entirely different airline. On March 6, the Federal Aviation Administration (FAA) levied a record $10.2 million fine against Southwest Airlines for allowing 47 of its Boeing 737 aircraft to remain in operation without proper inspections [source: Bloomberg].

The enormous fine rippled through the airline industry. Most carriers have MD-80s in their fleets, and the issue with Southwest's planes held true for all MD-80s. The aircraft are aging -- American Airlines (AA) said at the time of the April cancellations that the average age of its MD-80 was 18 years [source: Los Angeles Times]. When the FAA found that Southwest had failed to comply with a separate order to inspect its 737s, the federal agency announced that it would conduct unscheduled inspections of MD-80 aircraft owned by more than 100 U.S. carriers [source: Bloomberg]. As a result, many airlines began canceling flights in order to check or double-check the wiring on their planes.

At issue is the wiring that electrifies the planes' auxiliary hydraulic systems, which in turn powers some aircraft components. The problem isn't necessarily with the functionality of the wiring. The FAA's airworthiness directive -- an order to complete an inspection or work on an aircraft -- includes an engineering change order pertaining to the spacing of the wire bundles. The bundles are meant to be exactly 1 inch apart, secured to the wall of the plane's wheel well and properly covered [source: Bloomberg]. Sounds like a simple enough order, but the instructions came in a 38-page handbook and American Airlines told Aviation.com that its engineers may have had some trouble deciphering it [source: Aviation]. It was this confusion that compounded the massive cancellations while American Airlines inspected half its total fleet of jets for compliance [source: CBC].

In a statement issued on April 8, 2008, AA assured the public that the situation with the wiring wasn't a dangerous one; there was no problem with the safety of its planes [source: AA]. This echoes a similar sentiment from an American Airlines spokesperson shortly after the airworthiness order was issued and the inspections began in March. The spokesperson said the inspections were "an abundance of caution" on the airline's part [source: Bloomberg].

The Allied Pilots Association (APA) union pointed out, however, that these wiring bundles were located near the fuel tanks. A shorted wire could cause an electrical arc, which could ignite jet fuel fumes, potentially creating an explosion in the fuel tanks. It was for this reason, the APA said, that the FAA issued the airworthiness directive [source: Los Angeles Times].

There have been other problems with the MD-80 in the past. In 2000, airlines canceled flights when it came to light that there may be troubles with the jackscrew assembly -- a long bolt that controls the horizontal movement of the tail. An Alaska Airlines MD-80 crashed, killing 88 passengers [source: CNN], and inspectors found that the airline had been greasing the jackscrew every 2,550 hours in the air instead of the required 650 flight hours [source: The Avion]. The findings set off a wave of inspections similar to those seen in April 2008.

In the midst of the aircraft inspections in March and April 2008, CNN reported that there had been a series of recent in-flight troubles with the MD-80. The report stated American Airlines' MD-80s experienced 23 recorded landing gear malfunctions in "the last few months" [source: CNN].

For more information on aviation and other related topics, visit the next page.­ ­