Since Concorde jets retired in 2003, we haven't had supersonic commercial air travel. But that could soon change. NASA and Lockheed are working on an updated strategy for supersonic aircraft. Meanwhile, a startup called Boom hopes to cater to international jet-setters with its own supersonic service by the early 2020s.

Supersonic means faster than the speed of sound. It's actually a little misleading because sound's speed depends upon the medium through which it travels. Even factors like temperature and humidity affect how fast speed can travel through the air. So when we say “the speed of sound,” what we really mean is how fast sound will travel through dry air that's 68 degrees Fahrenheit (20 Celsius) at sea level. Kind of particular. That speed, by the way, is 768 miles per hour (1,235 kilometers per hour). Today's aircraft cruise at speeds closer to 550 mph (885 kph).

While we're talking about speed, it's helpful to explain what Mach numbers are. Some people use Mach 1 for shorthand as the speed of sound, but that's misleading. A Mach number actually refers to a ratio of an object moving through a fluid relative to the speed of sound in that fluid. So if an object is traveling through the air at Mach 1, both the object and sound are moving at the same speed through the air. Once you get above Mach 1, you're traveling faster than sound can in those conditions.

When you accelerate beyond Mach 1, you make some serious noise. You create a sonic boom as you push air out of the way faster than the speed of sound. The increased pressure releases soon after the object passes, and that's what makes the booming noise. The larger and heavier the object, the bigger the boom. Concorde jets made a really big boom.

NASA and Lockheed are working on designs for new supersonic aircraft that won't be quite as loud. Their goal is to design a frame that will generate a softer, heartbeat-like boom rather than a clap of thunder. They want to reduce the amount of noise pollution supersonic travel can generate. They also hope to find new designs that will increase lift and improve fuel efficiency. If their plan works, we could have a more environmentally friendly way to travel long distances in just a few years.

Meanwhile, Boom is blasting ahead to create a commercial supersonic jet service for passengers with deep pockets. The startup plans to operate supersonic jets that can carry around 50 passengers at a go at speeds of Mach 2.2 or 1,451 mph, which the company says is 2.6 times faster than any other airliner out there. The company also says that ticket prices should be on par with an international business class seat. That's somewhere in the neighborhood of $5,000 to $10,000. It's not exactly an option for the frugal flyer.

Even if supersonic travel is never within the reach of the average traveler, the innovations and advances in aero technology that will make supersonic flight practical again could find their way into other types of aircraft. And as aircraft become more efficient, operating costs come down. That could lead to lower ticket prices down the line. So even if, like me, you can't spring for a quick jaunt across the pond, you might still benefit from all those booms overhead.

Now That's a Throwback
J.J. Fad’s song “Supersonic” came out almost 30 years ago, right during the heart of jet-setters getting supersonic aboard the Concorde.

Who Are the Real Caesar, Melba and General Tso? 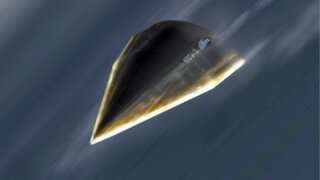 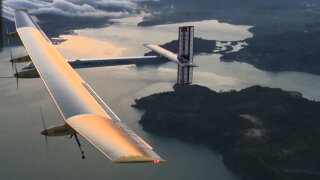 Fw:Thinking Video: This Plane Doesn't Use a Single Drop of Fuel