Browse the article When Your Face Is Your Boarding Pass 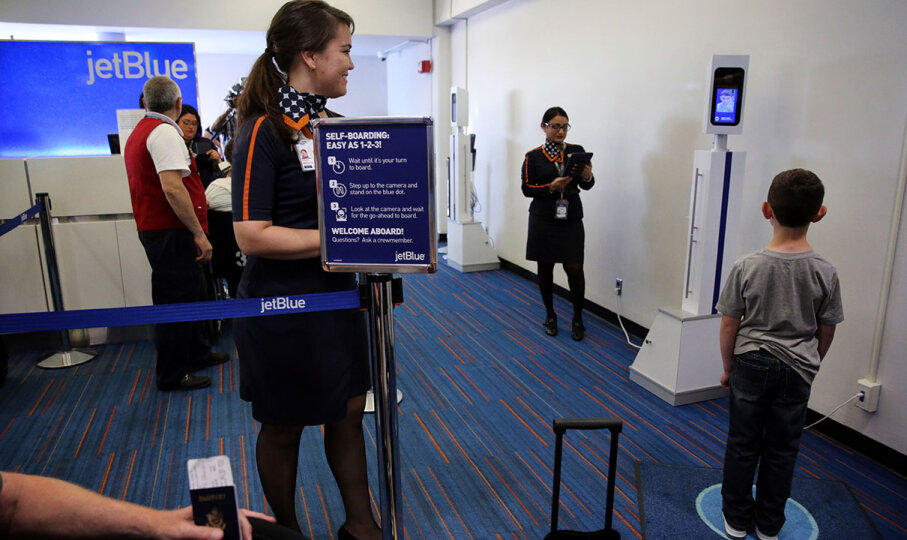 In June 2017, JetBlue gave passengers (and press) the opportunity to try out a boarding system that relied on facial recognition technology rather than boarding passes. Craig F. Walker/The Boston Globe via Getty Image

Toss out your paper boarding pass and put away your phone. JetBlue is testing a new verification process that allows travelers booked on international flights to board using only their faces. At the gate, passengers step in front of a camera kiosk and face-recognition technology confirms their identity in less time than it takes to scan a bar code. The airline company wants to increase the speed and convenience of boarding, while improving security on flights exiting the U.S.

"What we're trying to do here is demonstrate a way of having biometric capture on exit, but at the same time doing it in a way that improves the passenger experience," says Sean Farrell, portfolio director for government security at SITA, a global provider of IT, communications and border security technology for airlines.

SITA is collaborating with JetBlue and U.S. Customs and Border Protection to implement the biometric system, which is part of a larger Department of Homeland of Security (DHS) initiative to better verify the identity of people leaving from U.S. airports. Currently, airlines collect passport information, which contains a photograph and fingerprints, from travelers entering the country from outside U.S. borders, but U.S. Customs and Border Protection doesn't have the ability to confirm whether a person leaving the country is the legitimate owner of the passport, says Farrell.

"That creates a security loophole," he says.

One of the main concerns the U.S. government has is foreign visitors overextending the amount of time they've been given to stay in the country. Depending on the country of origin, some foreign visitors may be able to stay a couple of months. Foreign students may get a few years. There are a lot of variables. But knowing who is coming or going is an important component of national security.

A DHS report found that of the 50,437,278 foreigners who visited the United States legally in 2016, 739,478 people overstayed their visas. Having biometric security at the borders can help security officials prioritize investigations of individuals who may pose a threat to U.S. citizens.

The writer gets cleared after testing out JetBlue's new biometric scanning system for travelers exiting the U.S.
Tracy Staedter

At a demonstration event held for the press in June at Logan International Airport, I had a chance to try out JetBlue's biometric scanning system. I supplied my passport information ahead of time, just as regular travelers would have to do, and I went through the same check-in and security line as other passengers.

But at the gate, getting approved for flight was just a matter of approaching a slim kiosk about 5 feet (1.5 meters) tall. A camera in the rectangular screen recorded my approach, snapped a still image, and in a matter of seconds, displayed a green check mark that I'd been okayed.

What I didn't see was the computer processing going on in the background. The image taken at the kiosk was matched with my passport photo already on file with U.S. Customs and Border Protection.

JetBlue is aiming for accuracy rates of at least 97 percent or higher, says Farrell. But if the biometric system determines a mismatch, the passenger will be pulled from the line to have their identification manually verified by a crew member.

Having an automated entry-and-exit screening system, in particular for foreigners who hold a passport from another country, was first signed into law in 1996 as part of the Illegal Immigration Reform and Immigrant Responsibility Act. After the 9/11 attacks, the 9/11 commission recommended that the country, "properly supported by the Congress, should complete, as quickly as possible, a biometric entry-exit screening system." According to the Electronic Frontier Foundation, a handful of other U.S. Acts also have called for biometric screening at borders, including the USA-PATRIOT Act and the Enhanced Border Security and Visa Entry Reform Act of 2002.

But in the years since, administrations have been slow to channel the necessary funds to develop a biometric system. That's made it difficult for law enforcement agencies to know who is in the country overstaying their visas, especially those who may be of a security concern. In 2014, the Department of Homeland Security requested funding for a program called Air Entry/Exit Re-Engineering Apex, and in 2016, Secretary of Homeland Security, Jeh Johnson issued a report describing the entry/exit strategy and stating, "I have directed CBP to redouble its efforts to achieve a biometric entry/exit system, and to begin implementing biometric exit, starting at the highest volume airports, in 2018."

As part of the ongoing quest to implement biometric technology at airports, the U.S. Customs and Border Protection entered into the partnership with SITA and JetBlue to begin testing the technology. Beginning in early June 2017, passengers on flights between Boston's Logan International Airport and Aruba's Queen Beatrix International Airport can participate. It's not mandatory, but Joe and Maureen Gugliotta of Brockton, Massachusetts say they would opt in.

"I think anything that helps this country protect itself is a good thing," says Joe Gugliotta. "It's something we ought to implement across all airlines and all cruise lines for that matter."

Unlike other verification systems designed to speed travelers through checkpoints — such as the TSA Precheck program for U.S. travelers visiting U.S destinations and the Global Entry program for U.S. travelers returning from foreign countries — JetBlue's biometric boarding doesn't require any advance signup or separate enrollment. Identification details, including a photograph, have already been captured during the passport or visa signup process and saved in a U.S. Customs and Border Protection database.

"All of this data is being stored securely by the U.S. government in their data centers and not by an airport authority or JetBlue or SITA," says Farrell.

After the testing phase at Logan International Airport is completed, U.S. Customs and Border Protection will move forward with its plan to implement the biometric exit system in 2018.

Now That's Interesting
Like everyone else, you have unique fingerprints, facial features, voice patterns and even a certain kind of walk. But your unique odor also could help identify you. Scientists at the Technical University of Madrid found that each person has recognizable patterns of body odor that remain steady over time, which could be used as a kind of "smell print" for identification.