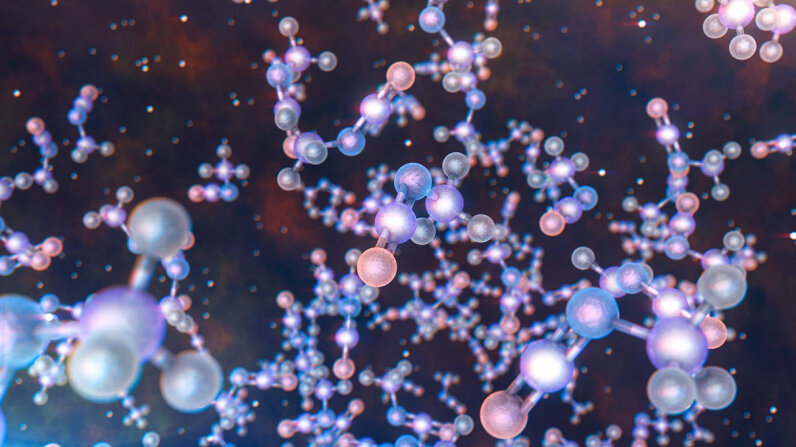 Artist's impression of what methyl isocyanate molecules look like. These prebiotic molecules are one of a family that forms amino acids and peptides (aka the building blocks of life). ESO/L. Calçada

The world's most powerful radio telescope has peered deep into a system of stars and found they're surrounded by chemicals that are necessary for life to form.

This isn't any old star system. It's a region of space that resembles what our solar system may have looked like 4.5 billion years ago.

Using the awesome power of the Atacama Large Millimeter/submillimeter Array (ALMA) in Chile, an international team of astronomers discovered the presence of methyl isocyanate in the triple star system IRAS 16293-2422, located around 400 light-years away in the constellation of Ophiuchus. These baby stars resemble our sun in its formative years and occupy a busy star-forming region called Rho Ophiuchi.

Here on Earth, methyl isocyanate is known as a very toxic compound and is used in a range of industrial processes. Composed of carbon, hydrogen, nitrogen and oxygen atoms (forming the CH3NCO molecule) a tragic methyl isocyanate gas leak caused thousands of deaths and injuries during what is considered to be the deadliest industrial accident in history — the Indian 1984 Bhopal disaster.

In space, however, when methyl isocyanate pops up in a star-forming region, the organic compound's life-giving potential becomes very interesting. The chemical is known as a prebiotic molecule and belongs to a family of chemicals that forms amino acids and peptides — the stuff that proteins are made of and, therefore, the backbone of life as we know it.

Astronomers figured out that methyl isocyanate was present by analyzing the light that the protostar emitted. That handy and standard method is called spectrographic analysis.

The prebiotic molecule is "located in the warm, dense inner regions of the cocoon of dust and gas surrounding young stars in their earliest stages of evolution," according to a statement. So this precursor for life can form in interstellar space to become an integral part of the material that's condensing as protoplanetary disks around these young stars.

"This implies that this molecule, and thus the basis for peptide bonds, is indeed likely to be present near most new young solar-type stars," writes Niels Ligterink, from Sackler Laboratory for Astrophysics at Leiden Observatory, the Netherlands.

Planets eventually form from these protoplanetary disks. Although ALMA has found these prebiotic chemical fingerprints in a distant star-forming region, this has exciting implications for our understanding of how life formed on Earth.

"By finding prebiotic molecules in this study, we may now have another piece of the puzzle in understanding how life came about on our planet," the researchers write.

But that's not all. In 2012, astronomers also using ALMA discovered glycolaldehyde — a sugar molecule — surrounding a sunlike star in the same star system.

"In the disc of gas and dust surrounding this newly formed star, we found glycolaldehyde, which is a simple form of sugar, not much different to the sugar we put in coffee," said astronomer Jes Jørgensen, who works at the Niels Bohr Institute in Denmark, at the time. "This molecule is one of the ingredients in the formation of RNA, which — like DNA, to which it is related — is one of the building blocks of life."

It looks like Rho Ophiuchi is a stellar cocktail of life-giving chemicals – we just need to wait 4.5 billion years to see if life evolves from the cosmic mixology.

Now That's Interesting
The term "abiogenesis" refers to how life arises from nonliving matter, or how organic arises from inorganic.