What does it take to turn a spaceship into a museum piece? 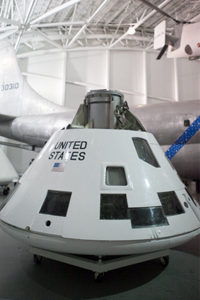 Although they’re made to withstand serious abuse, you can’t just plop a space capsule into a museum exhibit. Plenty of work must be completed prior to public display.
Courtesy 40 Nights Photography and Strategic Air & Space Museum)

Spacecraft are a unique culmination of humankind's technological ingenuity. They require untold millions of dollars and man hours to build and are jammed with bleeding-edge gadgetry. And then one day they are simply outdated ... and out of work.

Then, some of these once-glorious spaceships start their second lives as celebrities and star attractions at museums. But how exactly does a ship that once roamed the stars become an Earth-bound attraction suitable for long-term public viewing?

It starts, of course with an acquisition process. If you're in charge of a museum looking to score a major piece of space history, it helps to know exactly what piece you need to flesh out your collection. Perhaps you're looking for just a few artifacts that traveled to the moon. Or maybe you're audacious enough to ask for an entire space shuttle.

You might start by inquiring directly with NASA or a related space agency that's in possession of said objects. In some instances, you might even approach a private collector who had the means (and cash) to acquire a spacecraft.

There's a lot of competition for decommissioned spaceships, so the process almost invariably is much more formal and requires a lot of planning and paperwork. If you happen to run one of many private space museums, it's unlikely NASA will just donate one of their old machines to you. In that case, the piece is loaned for a predetermined amount of time.

That is, of course, unless you happen to run the Smithsonian. Because the Smithsonian is another government-run facility, the spacecraft is simply transferred from one agency to another, again, for a specified duration.

There's more work involved if you want a limited-edition item like a space shuttle. For these crown jewels, NASA set forth strict requirements. They wanted each shuttle to have the largest possible audience (meaning a museum near a large metro area), as well as a state-of-the-art display facility. Each recipient also had to pony up a galaxy-sized pile of money for display preparations and transportation costs.

Of course, smaller craft and individual pieces of space gear are much easier to come by. So, play your zero-gravity space chips just right and you might land a lunar lander (or a copy, anyway). But the work to make that piece museum-ready -- and to transport it to its display hall -- well, that part takes a space-age-type effort.

From Reality to Replica 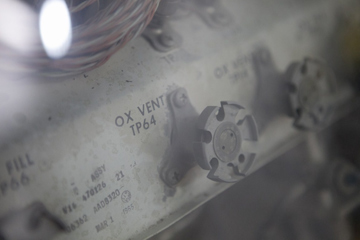 Hazardous materials are a major concern. Active spacecraft have all sorts of potentially dangerous items onboard, such as oxygen tanks.
Courtesy 40 Nights Photography and Strategic Air & Space Museum

Before a space agency lets any transportation workers even touch a spacecraft, they have to make sure it won't hurt anyone or cause a national security incident. So engineers carefully scour the craft and remove and replace certain parts.

Hazardous materials are among the first to go. They drain fuels and lubricants and pull the associated tanks, too. Gas-related systems, like oxygen tanks, must be taken out as well.

Security issues are also a concern. Engineers remove high-tech items too classified for the public eye.

And workers often strip out parts that are still usable in other craft. After doing so, they may replace those components with replicas so that viewers get a sense for what the ship really looked like.

For the space shuttles, entire sections of the crafts were eviscerated for reasons other than safety. Engineers wanted to examine how years of spaceflight had affected various systems. For example, they removed and dismantled the engines to understand how well they endured their workloads. They even took out the windows to better see how the materials had fared.

Once a craft finally gets the green light for transport, well, you can't use a Star Trek transporter to magically whisk a spacecraft from a landing field to a museum. And when you're talking about moving a hulking, massive spaceship from Point A to Point B, things can get tricky in a hurry.

It all depends on size and transportation options. The Smithsonian and National Museum of the United States Air Force, for example, are adjacent to active landing strips, meaning that larger craft can just land nearby and then taxi directly into display hangars.

With smaller craft, it's sometimes possible to partially disassemble them and then transport them via highway. In these situations, a transport company (such as a trucking company) works directly with the space agency to understand the weight and size of the parts that need to be moved. Then the trucking crew works out the logistics of getting each section of the craft to its final destination.

Keep reading and you'll see more about how spaceships navigate their way to museums. Sometimes, that process involves tight turns, crazy politics and a whole lot of cash.

Next Time, Use a Transporter 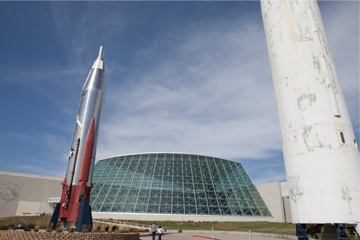 Disassembly comes at a high price. Only qualified technicians know how to break down and then rebuild such specialized machines, so the museum must foot the bill for their labor. And this process is so expensive and time-consuming that it's not always a viable option.

That was definitely true when it came to the three retired space shuttles. NASA required each shuttle to remain totally intact during transport, in part to cut costs but also to the preserve the last-flight look and battle scars evident on each ship.

Moving the shuttle Endeavour to the California Science Center (CSC) was a classic case of the challenges involved with this project. Because the shuttles can't fly without help, they were strapped to the backs of 747s and flown to their destination cities. For the CSC, that was Los Angeles.

Then the five-story tall, 78-foot wide craft was rolled along 12 miles of city streets to the CSC. To make this possible, the city had to raise power lines and cut down hundreds of (eventually replaced) trees. And as a gesture of goodwill towards local residents angry about the trees, the CSC invested $2 million into communities affected by the tree removal.

The final price tag of all of this transportation-related work? Nearly $29 million.

That number doesn't even factor in the display facility. For the shuttle Atlantis, the Kennedy Space Center Visitor Complex in Florida blew a cool $100 million.

And as for upkeep? Well, that's even more. According to Brian York, curator at Strategic Air & Space Museum near Omaha, Nebraska, museums have three basic options when it comes to servicing defunct spacecraft: preservation, restoration or just leaving it as-is.

Preservation can mean removing any matter (such as mold or rust) that could result in material degradation. It may also mean creating a shell to protect a craft from environmental conditions and from the busy hands of museum visitors. In extreme cases it could mean hiding a craft in a sealed room forever, with only a replica on display.

Restoration might include removing damaged sections and replacing them so that the craft looks brand new. Or, a museum (or space agency) might decide that a craft best tells its story it its heavily-used condition so that everyone can see the abuse these machines must absorb.

Upkeep varies depending on the type of display. In a protected display, a little light cleaning might suffice for years. But in hands-on exhibits, curators must be prepared to repaint and repair items continuously because visitors will push, pull and turn every knob and lever in sight.

It's just one more budget item in a very long list of expenses involved in displaying spacecraft at a museum. Spacecraft display, like spaceflight itself, clearly does not come easy, or cheap.

Whenever I walk into a museum filled with flying machines, it's hard not to be overwhelmed by the enormity of such craft. And to think that some of them actually careered around the Earth at thousands of miles per hour -- well, there's no wrapping my head around that. So to finally see these ships up close and in person in a tangible way helps connect me to the reality of spaceflight. For people like me, who can hardly imagine what it would be like to fly through space, museums are the one way we can really get a feeling -- no matter how fleeting -- of what it would be like to zip around in orbit.

Can amateur astronomers spot exoplanets?
So You Want to Be an Astronaut? This NASA Newbie Has Some Tips
Gravitational Waves Detected for a Third Time, Revealing Another Black Hole Collision