by Ian O'Neill, Ph.D. Apr 28, 2017
Much of Mars' surface is dusted with fine-grained materials that hide the bedrock underneath. That regolith could come in handy for making Martian bricks to build structures. In this scene, you actually can see the bedrock except where covered by sand ... NASA/JPL-Caltech/Univ. of Arizona

To truly become a multiplanetary species, humanity will have to learn to use the local resources on whatever alien world we choose to inhabit. In the case of Mars, that means constructing buildings from bricks fabricated with Martian material.

The first human mission to the red planet – probably NASA's trip planned for sometime in the 2030s – will likely be a short-term mission with most of the components for a temporary habitat built on Earth and shipped to Mars before astronauts even land. Like Mark Watney's ill-fated Mars outpost in "The Martian," cylinderlike Earth-made habitats likely will be the first choice.

But if we are to permanently live on Mars, we're going to have to learn to "live off the land" and find in-situ materials that can be used to build a growing colony.

"Eventually, when human beings populate Mars, we'll have to find local construction materials ... you can't ship everything from Earth," says professor Yu Qiao, a materials scientist who works at the University of California, San Diego (UCSD) and part of the team who just published on the topic in the open-access journal Scientific Reports.

Qiao is working on developing a key component of civilization that we take for granted down here on our planet. He's trying to find ways to easily fabricate bricks that would be used as the basis of construction on Mars, and he's discovered a unique method that could accomplish this task surprisingly easily with just one ingredient.

"If you look at Earth and how civilization began, we began by building mud houses ... so I guess it's pretty logical, at least in the early stages of colonization of Mars, if we can turn the Martian soil into building blocks," Qiao tells HowStuffWorks.

Mars' soil is known as regolith – a very fine, rust-colored material that covers all of the planet. Formed after eons of meteorite impacts, these tiny grains create Mars' famous dune fields and are blown high into the atmosphere, sometimes creating global dust storms.

Although regolith has been eyed before as potential brick-building material, the assumption has been that it would need to be mixed with a polymer-based chemical to bind the loose material to form a solid block. Then, once mixed – like the water and soil that creates mud bricks – these Mars bricks could then be baked in an oven to make them solid.

Researchers investigated the bricks' strengths and found that even without rebar, they are stronger than steel-reinforced concrete. You're looking at a sample after it underwent testing to the point of failure.
Brian J. Chow and Yu Qiao

Scientists originally thought that constructing these bricks would be energy intensive — likely requiring a nuclear-powered kiln, a heavy piece of kit that would need to be developed on Earth and launched to Mars. Qiao, however, has found that he only needs to apply pressure to create the brick, roughly the equivalent of a 10-pound (4.5-kilogram) hammer dropping about 3 feet (1 meter). No heating and no kiln required.

As we don't currently have any real Mars regolith to experiment on, Qiao and his team used a Mars simulant — a material developed by NASA that closely approximates the known chemical composition and grain size of the real thing. Learning from his experiences with experiments carried out on lunar regolith in previous work with NASA, Qiao realized that not as much of the polymer binding agent would be needed to create the Mars bricks. But through his investigations, he discovered something odd.

"So, we started with 6 percent of binder to Mars soil simulant – it worked great," says Qiao. "Then we reduced it to 4 percent, still worked, then reduced it to 2 percent ... and then 1 percent and it still worked! Then we said: 'Wait a minute. What's going on here?'"

Qiao had discovered something strange about the regolith simulant itself – by only applying pressure to a sample, the material would fuse together by itself with no added polymer binder!

"That's when we realized that there's something fundamentally interesting about the simulant material itself," Qiao said with some excitement. "We believe [the binding effect] is caused by the iron oxide – the reason why Mars looks reddish – and it seems that it's the binding agent here."

Of course, Qiao cautions, this is a simulant he's working on. We won't know if the real Mars regolith reacts in the same way until we physically go to Mars or return a sample to Earth.

Researchers compacted Mars simulant under pressure in a cylindrical, flexible rubber tube. This is what the result of the experiment looked like before it was cut into bricks.
Brian J. Chow and Yu Qiao

Currently, Qiao's team has only produced small coin-sized samples of material, but these tests have proven that the material is very strong – stronger than steel-reinforced concrete. The next test would be to scale up the experiment to produce larger samples. And if larger bricks can be fabricated using this method and if the real Mars regolith binds similarly to how these experiments predict, our future Mars colony has some pretty interesting construction options.

He imagines that future Mars colonies might have an automated regolith collection vehicle that scoops up the loose material and compacts it into individual bricks as it travels – like a combine harvester creating bales of hay from a field.

"The other direction is that you put the soils into the structure layer by layer and compact it layer by layer," says Qiao. "So, in this way you can build up large-scale structures without producing bricks – kind of like additive manufacturing." This would be a little like 3-D printing, but without a printer – just a compactor.

"I'm not sure I'd survive that trip! But I would be very happy to be the brickmaker for those brave people," he says.

If You're Missing a Limb, the Brain Recruits Another for the Job 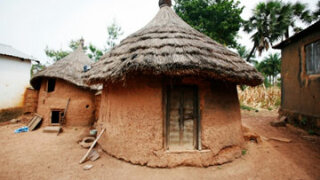