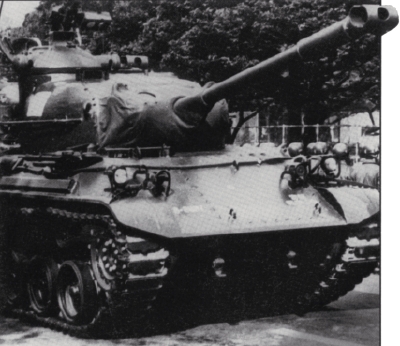 In 1950, five years after the end of World War II, Japan began to rearm, using, among other developments, the Type 61 Main Battle Tank. The threat motivating rearmament in a country severely shocked by the loss of the Great East Asian War was the traditional threat from the west, the Soviet Union.

The terms and conditions of rearmament, however, were far different from those of the period 1870 to 1945, when Japan had lifted itself by its bootstraps from a backward, nontechnical nation to a major world power with imperial ambitions. Now rearmament was directed toward defensive rather than offensive operations.

At first, the United States supplied M-4 Shermans and M-24 Chaffees to the new Japanese Self Defense Forces. These were soon considered obsolete and too heavy. Consequently, the Japanese Self Defense Forces sought a light --less than 40 tons -- and highly mobile tank. They also wanted a tank that could be built in Japan to help revive the country's shattered industrial base. The first design, the STA-1, and its three predecessors emphasized these qualities and were even lighter than the Swiss 36.5 ton Panzer 61, a medium tank mounting a 105 millimeter main gun.

The STA-3 design was adopted, and production of the Type 61 tank began in 1961. Initially, it weighed 34.5 tons and mounted a 90mm main gun similar to that used on the American M-48 Patton. A total of 564 Type 61s are believed to have been produced, but actual production figures are classified. In its final configuration, the Type 61 weighed 38.5 tons.

The Type 61's engine was built by Mitsubishi-Nippon Heavy Industries, Ltd., which was reorganized and renamed after the war. The V-12 air-cooled diesel engine displaced 29.6 liters and produced 600 horsepower. This engine continued the Japanese practice of mounting air-cooled diesel engines in armored vehicles, a practice that began in 1934 with the Type 89B Medium Tank.

The turret is cast in one piece and resembles the American M-47 with its large overhanging bustle. Armor is rather light for a Main Battle Tank: only 2.5 inches maximum on the turret face, 1.8 inches on the glacis down to a minimum of .6 inch on the hull rear.

The 90mm gun is fitted with a T-style muzzle brake and a fume extractor to keep breech gases out of the tank. The gun fires armor-piercing capped and high-explosive ammunition. Secondary armament is based on the American pattern: A 7.62mm NATO machine gun mounted co-axially with the main gun and a .50 caliber machine gun mounted on the turret top for antiaircraft use. No nuclear-biological-chemical (NBC) protection is fitted, although there is provision for storing NBC protective clothing and respirators.

Continue to the next page to learn the specifications of the Type 61 Main Battle Tank. 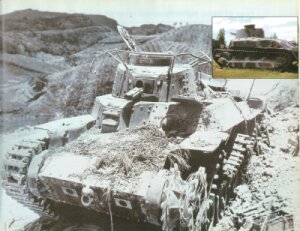