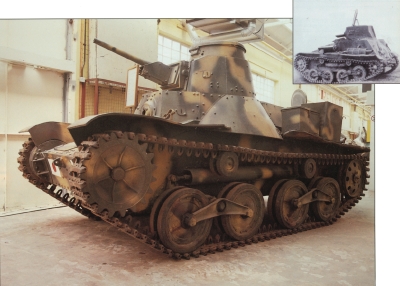 Perhaps the most ubiquitous of all Imperial Japanese tanks was the Type 95 KE-GO Light Tank. The Type 89 was originally intended to be a light tank, but armor and the 57 millimeter gun raised it into the medium class and made it very slow. Therefore, in 1933 design work began on a new tank that could keep up with the newly formed mechanized infantry.

Nearly 1,250 of these light tanks were built by Mitsubishi and others under the name of HA-GO (the military designation was KE-GO) between 1935 and 1942. They were used in both cavalry and infantry roles on every front in the Great East Asian War.

The Type 95 was powered by an improved air-cooled diesel engine, which was built by Mitsubishi and which produced 120 horsepower. The hull was of iron girder construction, suitably reinforced and covered with armor to a maximum thickness of .47 inch.

Woven asbestos curtains lined the interior to protect the three crewmembers -- driver, machine gunner, and tank commander -- from heat thrown off by the air-cooled engine. The curtain also served as a cushion when traversing rough ground. Space between the curtain and the hull wall supposedly allowed air to circulate. The driver sat on the right side in the front behind a hatch that could be propped open. The machine gunner sat to the driver's left, and the tank commander sat, or stood, in the turret.

The Type 95 was armed with a 37mm main gun as well as two Type 91 6.5mm machine guns, one mounted in the hull and the other in the turret facing to the rear. The 6.5mm machine guns were exchanged for more powerful 7.7mm Type 97 machine guns in 1941, The commander was responsible for loading, aiming, and firing the main gun, The Type 95 tank carried two types of ammunition, Type 94 high-explosive and Type 94 armor-piercing.

Continue to the next page to learn what modifications were made to the Type 95 KE-GO Light Tank.

The most characteristic feature of the Type 95 KE-GO Light Tank was its simple suspension system. The tracks were driven through the front sprocket. Two bogie wheels were suspended on a single bell crank with two bell cranks per side. There were two return wheels.

For all its ruggedness and simple maintenance, the suspension system had a tendency to pitch so badly on rough ground that the crew sometimes found it impossible to drive at any speed. In the close confines of the hull, motion sickness was often a problem.

An amphibious version, the Type 2 KA-MI, was also built. It carried a fourth crew-member, responsible for amphibious preparations and two detachable pontoons. This amphibious version was used primarily by Special Naval Landing Forces, but by the time it entered service, most Japanese amphibious landing operations were over.

The Type 2 KA-MI was encountered by the United States Marines and Army in the Marshall and Mariana islands, particularly on Guam, where it was used -- and largely wasted -- in static defense positions.

A final modification, designated the Type 98 KE-NI, traveled at 31 miles per hour and was somewhat lighter than the original Type 95, even with its heavier (.62 inch) armor. It entered production in 1942, but only about 200 were manufactured.

Like the Type 89, the Type 95 and its variants were used in all theaters of the Great East Asian War, primarily to support infantry or as cavalry reconnaissance and, to a lesser extent, as raiding vehicles. When the war ended in August 1945, hundreds of Type 95s were left in China. They were reportedly used by the army of the People's Republic of China during the Korean War.

Continue to the next page to learn the specifications of the Type 95 KE-GO Light Tank.