by Patrick J. Kiger Apr 3, 2018
A wounded soldier is removed from the battlefield during the White Stork 3 Operation in Afghanistan in 2011. The first hour after injury is the most critical time for saving lives. Jose Nicolas/Getty Images

If you're fascinated with nature's oddities, you might already know about tardigrades, a phylum that includes more than 1,200 species of eight-legged creatures that typically are no bigger than 0.02 inches (0.5 millimeter in length). As this 2012 Smithsonian article details, the tardigrade's claim to fame is the ability of some tardigrade species to survive even in incredibly harsh extreme environments, from boiling springs to the icy peaks of mountains in the Himalayas. In one experiment, tardigrades — without tiny astronaut suits to protect them — even survived the vacuum of space, with its extreme cold and high levels of radiation.

How the miniscule animals do that is even more amazing. Some species have the capacity to achieve different forms and varying degrees of cryptobiosis, a state in which an organism's metabolic activity essentially slows to a standstill when living conditions are hostile. They've been known to survive for years that way.

Cryptobiosis is the sort of extreme survival trick that the Pentagon would love to be able to duplicate in order to keep seriously injured soldiers from dying before they can be transported to a hospital. That's why the Defense Advanced Research Projects Agency (DARPA), the military's research arm, recently created the Biostasis program, a scientific effort to use molecular biology to lengthen the so-called "golden hour" of battlefield survival following a traumatic injury.

As DARPA noted in a news release: "Essentially, the concept aims to slow life to save life."

It's All About Cryptobiology

DARPA Biostasis program manager Tristan McClure-Begley explains in an email, "The focus for Biostasis is to increase our knowledge of how best to intervene with molecular processes as they run awry following stress or injury to preserve the health of the system, and our motivation for doing so is to extend the time available to treat ill or injured military personnel.

"We used the science of cryptobiology — of which tardigrades are one of the most excellent and extreme examples — as a set of biological principles from which to craft the goals, scope, and potential technological approaches of the Biostasis program. We looked at what was known about how many different cryptobiotic organisms can do what they do at the molecular level, asked 'what is a unifying factor or core principle in common?', and then looked at what was cutting-edge across the fields of molecular pharmacology, materials chemistry, peptide chemistry, and so on and tried to envision approaches that could mimic those core mechanisms were they introduced into cells as chemical biology therapies," says McClure-Begley.

In a study published in the March 16, 2017 issue of the scientific journal Cell, researchers concluded that tardigrades' ability to hit the biological pause button comes from genes that control stress-responsive proteins, called tardigrade-specific intrinsically disordered proteins (TDPs). As this New Scientist article explains, when the animal is in a dangerous situation, the TDPs morph from their usual jelly-like consistency into a glass-like stiffness. That in turn reduces the flexibility of the cells and protects them from damage.

But it's not clear how that process could be replicated inside the human body, especially since DARPA is ruling out any techniques that would require altering the human genome. "It may be that peptide therapeutics based on the principles of how those intracellular tardigrade stress-responsive proteins work end up being a successful approach," McClure-Begley explains. "But a caveat that we state in the Biostasis program announcement is that any interventions must be passively applied to the system for effect."

Instead, the agency is hoping to come up with a drug that could be administered to have a similar effect. Assuming that's possible, another problem is how to bring a wounded soldier in suspended animation out of that state safely. It may be that the biostasis drug will have a temporary effect that eventually wears off, or that it can be counteracted by another drug.

"For example, you don't just take aspirin once and then never again," McClure-Begley says. "The effects wear off as the drug is metabolized and diluted out of the system. Other effects of drugs can be reversed by the administration of specific antagonizing compounds or additional interventions."

This all could require many years of research. The DARPA Biostasis program recently invited outside companies and researchers to apply for grants, in hopes of generating possible technologies that would be subjected to extensive testing.

William R. Miller, director of research in the biology department at Baker University in Kansas and an expert on tardigrades, says in an email that duplicating the animals' survival method would be a challenge, because of humans' size and greater complexity. It's difficult to imagine a person, for example, imitating tardigrades' ability to engage in anhydrobiosis — a type of cryptobiosis in which the animal removes the moisture from its body. "Envision walking down a hall, feeling dry — and immediately shriveling into a crusty ball of dust — say about 10 pounds (4.5 kilograms) of dust — in the middle of the hallway, and then waiting for the humidity to return to a level so you can rehydrate. [That] does not sound practical."

But Miller isn't ruling out the possibility. "Space travel and self-driving cars were not practical when I was born," he notes.

Now That's Interesting
According to DARPA's press release, biostasis might also be used to preserve blood products, drugs and other perishable medical items. 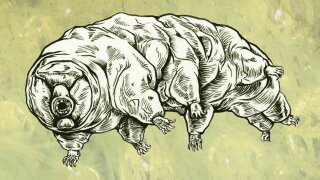 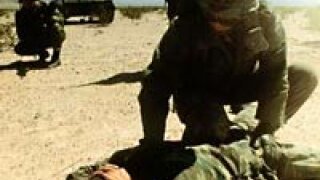 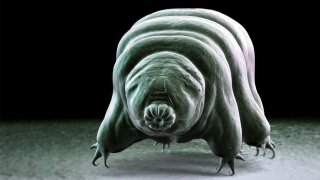 5 Reasons Tardigrades Will Outlast Us All