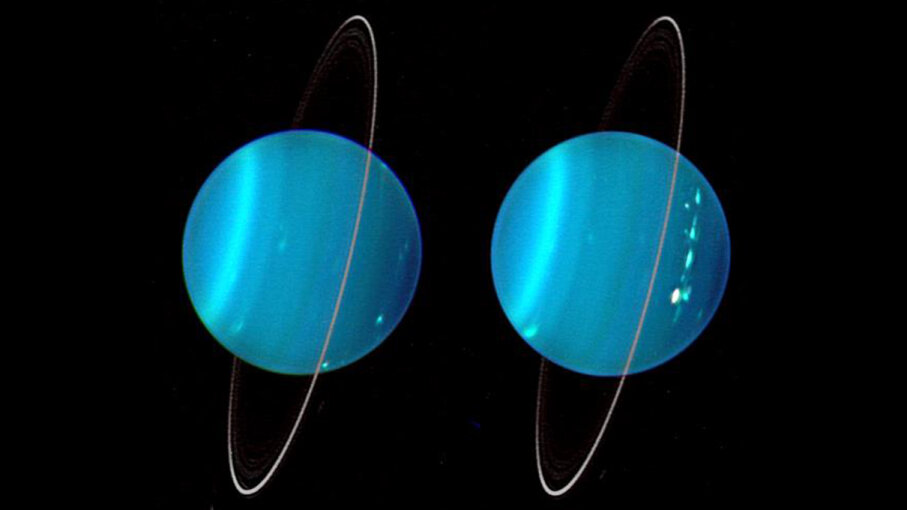 Pictured is an infrared composite image of the two hemispheres of Uranus courtesy of the Keck Telescope, which captured the photo in July 2004. Based on this image, it's easy to see how Uranus' poles might get more prolonged exposure to the sun than Earth's do. Lawrence Sromovsky, University of Wisconsin-Madison/W.W. Keck Observatory

Out of all the planets in our solar system, Uranus seems to get overlooked the most. Jupiter dwarfs it. Saturn's rings run circles around those of Uranus. And unlike Mars, no one has considered setting up a summer home on Uranus. But it's still a pretty incredible planet.

For one thing, the planet is on its side. Its axis of rotation is nearly level with its orbital path. For comparison, Earth's axis tilts at about 23.5 degrees; Uranus' axis has a tilt of 98 degrees. This means that Uranus practically rolls through its orbit (which is about 84 Earth-years long). Its polar regions receive prolonged exposure to the sun. In fact, Uranus' poles get more sunshine than its equator does.

Why is Uranus' orbit so wonky? Scientists suspect that millions of years ago, Uranus was involved in an enormous collision. Unfortunately, no one reported it to the Solar System Police, so we have no official record of it. But that might be why Uranus isn't quite (up)right.

While we've known about Uranus' peculiar tilt for a while, scientists at Georgia Tech have uncovered something new to us. Uranus' magnetosphere powers on and off throughout a typical day. The researchers relied on data collected from Voyager 2's 1986 flyby to simulate the ice giant's magnetosphere.

The scientists at Georgia Tech say that learning more about Uranus could help us understand many of the exoplanets we've discovered so far, many of which appear to be the size of ice giants like Uranus and Neptune. It could turn out that the peculiarities of Uranus are commonplace across planets in the Milky Way, meaning that, on the galactic scale, we could be the weirdos.