If you're a futuristic transportation buff, you're probably excited about the idea of trains that use powerful magnets to levitate over their tracks, eliminating friction and enabling them to zoom along at speeds would leave conventional railroad trains behind in the dust.

Except that there isn't any dust.

The Japanese actually have developed a high-speed maglev prototype called the Lo Series, which last year hit a top speed of 373 mph (603 kph) on a test track near Mount Fuji. The Central Japan Railway currently is building tunnels for a $50 billion maglev system that in a decade or so will enable passengers to travel from Tokyo to the city of Nagoya, 177 miles (285 kilometers) away, in just 40 minutes.

But to researchers from the U.S. Air Force's 846th Test Squadron, 373 miles per hour is, well, almost pedestrian. Earlier this year at New Mexico's Holloman Air Force Base, they sent an experimental vehicle hurtling down a 2,100-foot (640-meter) track at an astonishing 633 miles per hour. Watch the video above to see how it looked in action.

In accomplishing the feat, the researchers broke their own previous world record of 510 miles per hour, set in 2014, by 123 miles per hour, and a 513-mile-an-hour trial run a few days before.

Before you start feeling sorry for the Central Japan Railway, though, it's important to note that the vehicle used by the Air Force researchers wasn't a conventional passenger train. It's an unmanned sled — basically a metal box smaller than a car, with electromagnets attached to the underside and rocket engines on the back to give it thrust.

The electromagnets are chilled with liquid helium to get them down to a temperature of just 4 degrees Kelvin above absolute zero — just about as cold as an object can possibly get. That gives the magnets superconductor properties, and ensures that when the sled levitates an inch (2.54 centimeters) above the copper plating in the track's concrete rail, the resulting ride is super-smooth.

Beyond that, Lt. Col. Shawn Morgenstern, the Commander of the 846th, explained an a press release that the Air Force isn't trying to go super-fast for purposes of getting from one place to another, as the Japanese train is designed to do. Instead, the Air Force wants to use it to test how gadgetry in weapons such as smart bombs will perform while being subjected to conditions similar to combat flights.

"The maglev system gives us the ability to test systems without much vibration," Morgenstern said. "If you have sensitive components that are a part of a weapon system and you want to test them in a realistic environment, a system like this allows us to do that. We measure those vibration environments at various speeds to understand what the system is really capable of as we continue to go faster and faster."

The Air Force's ultimate goal is to push the maglev system even faster, and get the sled to break the speed of sound. That's something that's only been done once on land — back in 1997, by the British-built Thrust SSC rocket-powered car.

Now That's Interesting
Silicon Valley private spaceflight and electric car entrepreneur Elon Musk has proposed building a train called the Hyperloop, powered by electric motors and using air compressors for float and thrust, that would have the potential to travel even faster than the Air Force's rocket sled. 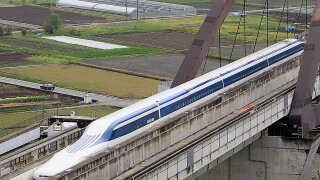 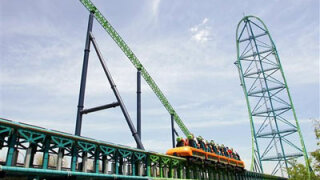 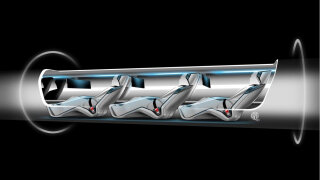