Browse the article Viking Warrior in Ancient Grave Was a Woman 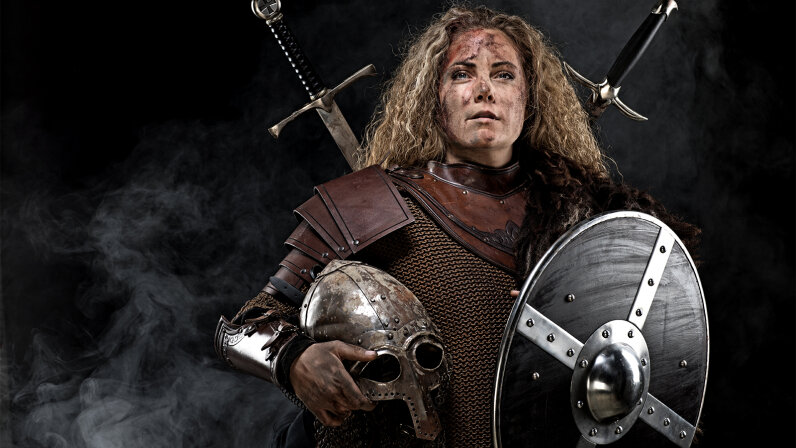 Though Viking women have been found buried with weapons before, nothing compares to the objects found at Bj.581, the gravesite in Sweden. Lorado/Getty Images

A Viking warrior is buried in Sweden in the 10th century. The grave is excavated in the 1870s. DNA results are published in 2017. Sounds like a typical archaeological process of discovery that we take for granted. This find, however, has been anything but typical, because this Viking warrior was a woman.

Found in an underground chamber by Hjalmar Stolpe in 1878, this warrior had been buried, in a seated position, with two horses, as well as a sword, axe, knives, spears, shields and armor-piercing arrows. In addition, a set of gaming pieces representing military strategy was found in the lap of the seated body. Surrounded by such weapons of war, and without typical female items such as jewelry or weaving equipment, this high-ranking warrior was assumed to be a man for more than 125 years.

Though there had been an osteological analysis in the 1970s suggesting a slender bone structure indicative of a female, conclusive evidence was not presented until 2017. Charlotte Hedenstierna-Jonson, an archaeologist at Sweden's Uppsala University, and her colleagues, including Neil Price, an archaeology professor at the university, published their genomic analysis in the American Journal of Physical Anthropology, explaining that ancient DNA taken from a tooth and arm bone of the buried warrior only showed XX chromosomes, with no Y chromosome, confirming this Viking warrior was a woman, likely more than 30 years old.

Why did the genetic results take so long? According to Hedenstierna-Jonson in an email interview, good science takes time. "When the ATLAS project started the process in 2015, this skeleton was one of several Iron Age and Viking Age skeletons to be analyzed. Working with ancient DNA is not the same as working with modern DNA, and processing the sample takes a long time, and is done in various stages. When we have the results from the analyses, the publication process begins. This also takes time, not least getting the paper sent on review and accepted. The first version of the paper was submitted in September 2016."

Could This Be a Woman?

These findings were met with questions and criticisms, including suspicions that the wrong bones had been tested. The same researchers from the original study published in 2017 responded in the February 2019 issue of the academic archaeology journal Antiquity confirming that the bones from the burial site, known as Bj.581, and labeled as such, were tested; bones from other sites were not and the tested site materials aligned with Stolpe's original notes and drawings from the 1878 exploration of Bj.581. As stated in the Antiquity article, "the occupant of Bj.581 will never be biologically male again."

In addition, Price and his colleagues acknowledge that items at the burial site do not necessarily mean they are the possessions of the buried Viking, but that their opinion is that this was the grave of a high-ranking warrior. "Most likely, she was connected to the troops in Birka, and linked to the garrison situated very close to the burial," Hedenstierna-Jonson says.

Regarding the question of a possible transgender warrior, the researchers caution that this is a modern-day concept being applied to an ancient, non-Western people. They do acknowledge that this is just one case study and "there are many other possibilities across a wide gender spectrum, some perhaps unknown to us, but familiar to the people of the time."

Compared to the 2017 article, the reaction to this new publication has been "very positive and supportive," Hedenstierna-Jonson says, "but the fascination with the grave seems to be the same."

The Birka settlement, located on the island of Björkö in east-central Sweden, was the country's first urban center and a key trade location in the 8th through 10th centuries. The site contains more than 3,000 known graves, with only about 1,100 excavated and examined so far, and only 75 found with "offensive weapons."

Though Viking women have been found buried with weapons before, nothing compares to the objects found at Bj.581. The amount and type of items at this site suggest a professional fighter, perhaps a mounted archer. And the game board and associated pieces also suggest a command role. The fact that no tools or agricultural equipment were found there reinforces this martial role in the society.

In addition, a tasseled cap, reserved for leaders of society, was found at the burial site. And the fact that she was probably not a local inhabitant also tells us something about her status. According to Hedenstierna-Jonson, "The relatively high level of mobility, indicated by the variation in strontium levels between three different teeth, is in concordance with the itinerant lifestyle of the social elite."

The placement of the site itself also reflects a certain standing, both in society and militarily. Bj.581 is the westernmost grave site found at Birka, prominently situated near the garrison located there, and had been marked by a boulder, making it visible both from the settlement and the surrounding lake.

Though these findings may lead to the reexamination of excavated graves and bodies to determine sex, Hedenstierna-Jonson and her colleagues are on to new projects. "The corpus of Birka's skeleton is constantly in focus for various research questions, and will continue to be so ... but for the ATLAS project, new materials are in focus at the moment," she says. "The most recent study [lead author Maja Krzewinska] was published last year and covers a more extensive number of skeletons from the Viking Age and early medieval town of Sigtuna. Currently, we are working on a study on people buried in so-called boat burials."