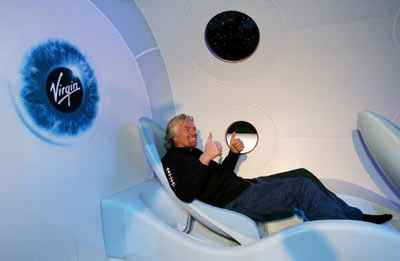 Sir Richard Branson gives a thumbs-up during the unveiling of a scale model of SpaceShipTwo in 2006.
Don Emmert/AFP/Getty Images

Virgin Galactic started booking passengers in 2005. Anyone who can pay the fee and pass a physical can go on a flight. Prospective passengers can book their flights directly through the Virgin Galactic Web site or through authorized ticket agencies across the globe. The costs are as follows:

Obviously, these flights cost significantly less than the $20 million that space tourists Dennis Tito (2001) and Mark Shuttleworth (2002) paid to fly aboard a Russian Soyuz spacecraft to the International Space Station.

Prospective passengers have to go through three days of training and pass a physical exam before their flight. As of January 2008, about 80 people had started training, which includes spinning in a centrifuge at 3 to 4 Gs. Further training will involve zero-gravity flights aboard WK2 to get acquainted with the weightlessness experience. When full operations start up, this training will take place at Spaceport America.

Virgin Galactic has emphasized safety in the designs of WK2 and SS2. For example, the hybrid rocket engine doesn't require storage of explosive propellants. The air launch of SS2 doesn't expose passengers to the risks associated with rocket launches -- if the rocket fails to ignite, SS2 can glide back for a safe landing. Feathering is a safer way to re-enter the atmosphere without incurring high heat loads like the space shuttle does. (But SS2 doesn't reach the velocity that the space shuttle does).

Virgin Galactic is the first company out of the gate, but others are vying to get into the burgeoning space tourism industry.

To learn more about Virgin Galactic and space tourism, take a look at the links below.

Acceleration is the rate of change of velocity. When your car is going from zero to 60 mph in 30 seconds, you're accelerating. In physics, acceleration is measured in meters per second squared. However, because we're familiar with that we experience due to Earth's gravity (g = 9.8 m/s2), acceleration is sometimes expressed in terms of Gs (1 G = 9.8 m/s2, 2 Gs = 19.6 m/s2, 3 Gs = 29.4 m/s2, etc.). According to Newton's second law of motion, acceleration is directly proportional to the force experienced divided by the mass of an object -- so, Gs are also associated with the force that a given mass experienced during acceleration. For example, when you start, corner or brake a typical car, you experience anywhere from 0.3 to 1 G. A roller coaster may accelerate you to 3 or 4 Gs for brief periods. Fighter pilots can experience as much as 8 Gs.

Accelerations affect the human body in various ways depending on the g-force and the length of time that you are exposed to those forces. At 2 Gs, your body will feel heavy (actually, because weight is equal to mass times acceleration (g), at 2 Gs you'll feel twice your body weight). At G forces above 4, people black out as it becomes harder for the heart to pump blood to the brain. To counteract this, spacecraft designs place astronauts in sitting positions in the direction of motion to distribute the g-forces equally across the body and limit the acceleration of the spacecraft, if possible. Fighter pilots wear special pressure suits that inflate and squeeze the abdomen to force blood to the pilot's head. Extreme accelerations (more than 15 Gs) can be fatal.