How does water on Mars and the moon differ from water on Earth? 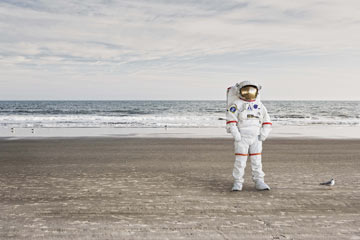 How often has this happened to you? You've just taken your seat at an upscale restaurant and the server immediately floors you with a question: "Would you like lunar or Martian water with your meal this evening?"

Sure, you can fake it. You can just say "Oh, lunar is fine!" like you know what you're talking about and then move on to pretending you're a wine expert, too. But let's face it: You have an inquisitive mind. That's why you're surfing articles on HowStuffWorks.com. What exactly is the difference between Martian water and lunar water? And what the heck kind of restaurant is this anyway?

At a molecular level, all water is pretty much the same. Two molecules of the hydrogen gas (2H2) combine with one molecule of oxygen gas (O2) to produce two molecules of water (2H20). Water may contain other substances in a diluted state, and as any TV weather anchor can tell you, it occurs naturally on Earth in solid, gaseous and (most importantly) liquid form. Remember, when in its drippy form, water is one of the key precursors to life as we know it.

That doesn't mean you should drink it, though. A sip of Martian water would likely taste so salty and acidic that you'd have a rough time gulping it down with dinner, much less living on it [source: Lloyd]. The jury's still out on moon water, but it may very well contain some real evening-destroying chemicals [source: Klotz].

The real difference between these two cosmic thirst quenchers, however, comes down to their origins.

Based on orbital analysis of the Martian surface, scientists believe Mars boasted rivers and lakes between 4.6 and 3.8 billion years ago. Then the planet's climate changed, leaving behind clay and empty riverbeds. Yet through it all, a portion of the water remained as ice in Mars' polar and mid-latitude regions. Recent studies also suggest that some ice even melts when temperatures rise and then refreezes. In other words, Martian water is old. It might have once nourished some form of life and, if humans colonize the red planet, it might do so again (but with some definite limitations).

Not in the mood for a vintage? Then enjoy the relative freshness of lunar water. Scientists previously thought the moon was a dry and barren rock. If it had any water in the dark corners, then it was only due to the asteroid and comet strikes of the late heavy bombardment period 3.9 billion years ago. So good luck scoring a drink there, right?

Then in 2009, NASA's Moon Mineralogy Mapper discovered proof of a chemical bond between oxygen and hydrogen in the lunar regolith (the layer of material sitting on top of a planet's or moon's rocky surface). This meant not just water, but vast reserves of water. You won't find any lunar lakes and rivers, but scientists predict every ton of regolith may contain 1 quart (1 liter) of water [source: Sutherland]. How did it get there? Well, there was already oxygen in the lunar rocks, but then the solar wind came blowing in and bombarded the moon with hydrogen. Scientists believe the hydrogen reacts with oxygen in the rocks, producing water molecules.

All this water is especially great news for humanity's future amid the stars. Water can certainly help sustain Martian or lunar bases, but the moon's massive reserves could also aid the production of hydrogen for rocket fuel.

Plus, the next time a server offers you a choice of cosmic refreshments, you'll have the information you need to make a refined decision.

Explore the links on the next page to learn even more about the solar system.

The Monster Star That Refuses to Die: Could Antimatter Be Fueling Its Supernovas?
A Simple Equation Calculates the Likelihood of Alien Intelligence, But...
'Steve' Lights Up Night Sky and Puzzles Astronomers