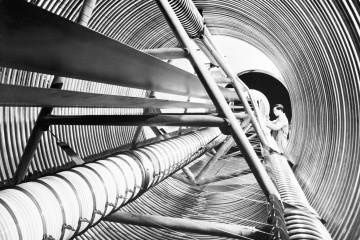 The particles have to come from somewhere before they hurtle through their paces. This 1941 shot is actually from Notre Dame University's atom smasher, which was new at the time.
© Bettmann/Corbis

When physicists want particles for their accelerators, they surf a website called OK Quark, where they answer a series of questions about what they're looking for. Would you like a particle with a positive personality, or one with a more neutral energy about it? That kind of thing.

Then the physicist takes the particle out to drinks (nobody wants to be stuck with a dud particle for an entire dinner). If everything goes well, the physicist asks the particle if it's interested in a process of acceleration. And that's how the Higgs boson was made!

If only. Unlike their cousins-in-science the biologists (who can browse all orders of rodents, roundworms and the like on websites for easy bulk shopping), physicists have to create their test subjects themselves. Turns out that grabbing a particle for high-speed collisions isn't as easy as just cupping your hands and blowing some subatomic particles into the Large Hadron Collider like so many invisible snowflakes.

Before we get into what we're actually putting into a particle accelerator, perhaps it's wise to give a little background on just what the heck we intend to do with our particles once we have them. What are accelerators, and why can't we toss in something a little more substantial than a particle, anyway?

The most well-known particle accelerator is probably the Large Hadron Collider, a 17-mile (27-kilometer) circular behemoth deep underground. Located in Switzerland, the LHC is run by the European Organization for Nuclear Research, or CERN. (Trust us -- the acronym made sense for the original French title.) The LHC became the Big Accelerator On Campus in 2012, when particle collisions at CERN revealed evidence of the elusive Higgs boson. Discovery of the Higgs allowed physicists to more confidently confirm the existence of the Higgs field, which gave us some answers about how matter in the universe acquired mass.

But if the LHC is the Beyoncé of the accelerator world, there are quite a few studio players happily plugging away as well. There are actually about 30,000 other accelerators humming around the world, and it's those working Joes that are to thank for all sorts of practical inventions [source: Dotson]. Consider the diaper.

That's right, the pal of any harried parent is the disposable diaper. Scientists who wanted to study the superabsorbent polymers used in disposables were having trouble studying them wet, so – ta-da! -- they put them through X-ray microscopy (which uses particle acceleration) [source: Clements]. Being able to identify and study the structure of these molecular chains led them to tinker with the formula and keep our modern diapers as dry as the explanation of particle acceleration itself.

Accelerators also find their way into medical environments, like cancer treatment. Linear accelerators (where particles collide with a target after traveling a straight line) send electrons to collide with a metal target, which results in precise, high-energy X-rays that irradiate tumors [source: RadiologyInfo.org]. So now that we know a little about what accelerators are used for, let's talk about what we're feeding them.

As we said before, scientists at a facility like CERN are charged (ha!) with producing the particles themselves -- which feels a little like asking an accountant to please build a calculator in order to complete a client's taxes. But particle physicists are a breed apart; it's no hassle for them. All they have to do is start with hydrogen, strip electrons using a duoplasmatron, and end up with protons. Whatever. No biggie.

And here is where we find that the simplest part of particle acceleration -- getting the darn particles -- still appears madly intimidating to anyone who doesn't get a holiday card from Stephen Hawking. But it really isn't as daunting as it sounds. For one, the hydrogen is just a gas that's fed into the first step of the particle accelerator -- the duoplasmatron. It may seem like something out of "Mystery Science Theatre 3000", but a duoplasmatron is fairly straightforward. Hydrogen atoms have one electron and one proton; inside the duoplasmatron, the hydrogen atoms are stripped of their electrons using an electric field [source: CERN]. What's left is a plasma of protons, electrons and molecular ions that passes through more extraction grids so only a proton beam is left [source: O'Luanaigh, CERN].

The LHC doesn't just use protons for a day's work. CERN physicists also have the fun task of colliding lead ions together to study quark-gluon plasma, which is just a bit of what the very, very early universe was swimming in [source: CERN]. By smashing together heavy metal ions (gold works, too), scientists can form the quark-gluon plasma for a moment.

But now you're far too sophisticated to believe that lead ions just appear magically in particle accelerators. So here's how it happens: The CERN physicist tasked with collecting lead ions actually does start with solid lead, lead-208, a specific isotope of the element. The solid lead is heated to a vapor -- about 1472 degrees F (800 C) [source: O'Luanaigh]. The lead vapor then gets zapped by an electrical current that ionizes the sample to create plasma. The newly created ions (atoms with a net electrical charge that have gained or lost electrons) are then whisked into a linear accelerator that gives them a bit of sprint and causes them to lose still more electrons [source: Yurkewicz]. After they're accumulated and accelerated once more, the lead ions are ready for the same road trip as the protons, and can zip through the Large Hadron Collider without a care in the world.

So there you have it. Particles for the big-time particle accelerators are not bought on the black market but created in-house.

Author's Note: Where do they get the particles for particle accelerators?

Maybe this article left you with one more nagging question: Can anything besides a particle go through an accelerator? To which the scientists at Fermi National Accelerator Laboratory said, "Of course. How about a ferret?"

Don't call PETA yet. First off, they weren't accelerating Felicia the ferret near the speed of light. (Yes, she had a name. Come on, it's not a farm.) Instead, they were using her as a maid. Ferrets are known for burrowing and inching their way through tight spaces. Felicia had a rag of cleaning solution tied to her collar by scientists, who let her Swiffer her way through the narrow pipes before they were connected during construction [source: Gustafson]. (They eventually got a robot to clean the accelerator.)